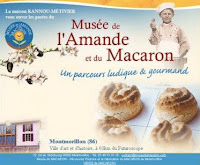 May 31 is National Macaroon Day.  I did a post on Chocolate Museums the other day for National Museum Day, I forgot to mention the Almond & Macaroon Museum  in Montmorillon, France. This museum pays homage to the generations of craftsmen who built the reputation of Montmorillon, Cité of Macaroons.  The Museum reveals the history of the macaroon, from the culture of the almond tree (and the multiple uses of almonds), to the arrival of the macaroon in France.

The Macaron (French spelling) or Macaroon (English spelling) 1) is a sweet confectionery. Its name is derived from an Italian word "maccarone" or "maccherone". This word is itself derived from ammaccare, meaning crush or beat, used here in reference to the almond paste which is the principal ingredient. 2)It is meringue-based: made from a mixture of egg whites, almond flour, and both granulated and confectionery sugar.

Macaroons can be Italian merinque cookies such as amaretti or fancy and colorful French sandwich cookies filled with ganache or jam, according to The Nibble. Their common ingredient is almonds, though the nut may take the form of ground almonds, almond paste, or almond liquor. Although they originated in Italy, France is the country that has an Almond and Macaroon Museum – Musee de l’Amande et du Macaron – in Montmorillon. Spain makes its own version with hazelnuts; India uses cashews.

There are many stories about the origin of the macaroon. There's one that says they were created and served at the wedding of Catherine de Medici. Another story is that they were created by monks in France in the 18th century. The term "macaron" has the same origin as the word 'macaroni' meaning fine dough, so maybe we should have macaroni to celebrate National Macaroon Day. In any case, the first macaroons were simple cookies made of almond powder, sugar and egg whites. At the beginning of the 20th century, marcaroons went 'double-decker' with wonderful chocolate panache to stick them together. Certainly the sandwich concept for macarons was created in France by Pierre Herme, the Picasso of Pastry.

CHOCOLATE CHIP MACAROONS
Posted by Janet Rudolph at 11:48 AM

I love macaroons and once tried to make them. Not difficult. Around Passover, whole Foods has lovely, delicious, large ones. I prefer traditional to chocolate.

Thanks for the nice post Janet...I never made macs, love them but afraid to try...one of this day will have enough courage to try to make them. Have a great week ahead :-)

Just discovered your lovely post and happy belated macaron day in the USA. I keep meaning to get to that museum and you've inspired me to just DO it!

Jill, you have to do a guest post on DyingforChocolate!