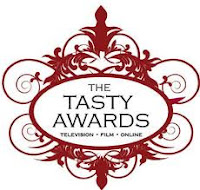 Can't believe I wasn't able to make it to the Tasty Awards this year! Trying to live in the moment, here are the winners that were announced on January 13, 2011at a Red Carpet Awards show at the historic Egyptian Theatre in Hollywood, CA. Portions of the show were filmed for broadcast and will be on national TV, as well as hulu.com and other sites.

In the meantime, here are the winners in various categories.
From the photos, looks like it was loads of fun!

Here's a link to all the Nominees and other awards
Posted by Janet Rudolph at 12:01 PM

Email ThisBlogThis!Share to TwitterShare to FacebookShare to Pinterest
Labels: The Tasty Awards