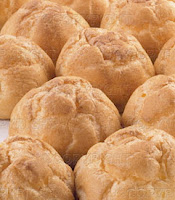 Today is National Cream Puff Day. Cream puffs are so easy to make, and there are so many ways to make them special. You can make a Croquembuche that elaborate structure that is so popular at the holidays here and abroad.  It's really just a triangular stack of cream puffs drizzled with chocolate or spun sugar. You can stuff Cream Puffs with all manner of sweet and savory fillings.

Ingredients
1/2 cup butter
1 cup water
1/4 teaspoon salt
1 cup all-purpose flour (some people use bread flour and that will really give these a different taste and texture, give it a try)
4 eggs

Instructions
Preheat oven to 425.
1. In a large pot, bring water and butter to a rolling boil.
2. Stir in flour and salt until the mixture forms a ball. Transfer the dough to a large mixing bowl.
3. Using a wooden spoon or mixer, beat in the eggs one at a time, mixing well after each.
4. Drop by tablespoonfuls onto an ungreased baking sheet.
5. Bake for 20 to 25 minutes in the preheated oven, until golden brown. Centers should be dry.
6. When the shells are cool,  split and fill.

Chocolate Cream Filling
1. Place the chocolate in the top pan of a double boiler over simmering water in lower saucepan (or in a double boiler). Stir just until the chocolate melts, then remove from the heat.
2. Pour cream into a bowl. Using an electric mixer set on high speed, beat until soft peaks form. Add the 1/4 cup sugar and beat until stiff peaks form, about 20 seconds.
3. Pour all of the melted chocolate into the whipped cream quickly, and continue to mix on high speed until evenly combined, about 1 minute.
4. Place the chocolate cream in a clean pastry bag fitted with a 1/2-inch plain tip. Pipe into the bottoms of the cooled cream puffs. Replace the tops on the filled bottoms and serve immediately. Alternatively, spoon the cream onto the bottoms being careful not to put too much. Of course, it looks pretty when it's piped!
***

Instructions
Preheat Oven to 400
1. Combine flour, cocoa and sugar in a small bowl.
2. In a heavy saucepan over medium heat, bring water, butter and salt to a boil.
3. Stir in the flour, cocoa, sugar mixture, until a smooth ball forms. Remove from heat and let stand for 5 minutes.
4. Add the eggs, one at a time, beating well after each addition. Beat until smooth and shiny.
5. Drop by heaping tablespoonfuls (golf ball size) 3 inches apart onto greased (or parchment lined) baking sheets.
6. Bake (in middle of oven) at 400 degrees F for 30-35 minutes or until set and browned.
7. Remove to wire racks. Let cool before splitting. Cool puffs completely before filling with whipped Cream, Ice Cream, or whatever!
Posted by Janet Rudolph at 7:10 AM