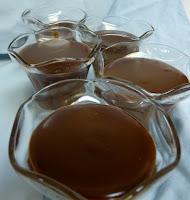 My mystery and chocolate worlds collide again! I met Bobbi Mumm on Facebook and Twitter. So good to call her a friend, even if she does live in Saskatoon! That's what's so much fun about Social Networking! Recently Bobbi posted her recipe for Chocolate Pudding on Facebook, and I must say the photo had me at... well, chocolate. I asked if she'd do a guest post, and here you have it!

Bobbi Mumm is a mystery and thriller writer in Saskatoon, Canada where she works half-time as an event planner at the University of Saskatchewan. In 2009 Bobbi wrote her first novel, Cream with Your Coffin. This past year, Bobbi signed with a U.S. literary agent who is now pitching Cream with Your Coffin to New York editors. Almost finished her second novel, thriller De Rigueur Mortis, Bobbi has fallen in love, all over again, with the mystery that is Paris.

When my family asks for pudding, one of my favourites is this recipe, adapted from The Joy of Cooking, Chocolate Pudding. The addition of the cream turns the slow enjoyment of this rich chocolate dessert into a sensory delight.

Stir dry ingredients in a heavy bottomed pan. Add water, mixing to a runny paste. Heat to a boil over medium heat, stirring constantly. Remove from heat. Stir in chocolate shavings until melted.

Add milk and cream (2½ cups) to chocolate mixture. Stir in cornstarch paste. Mix thoroughly. Cook, stirring constantly, over medium heat until it begins to thicken. Reduce heat to low, stirring, until mixture begins to simmer. Continue stirring and cook for one minute more.

Savour by eating with a very small coffee spoon.

Photo: Bobbi  Mumm
Posted by Janet Rudolph at 6:40 AM

Thank you Janet, for inviting me to do a guest blog. I'm amazed at all you do and I'm so glad we met!

My pleasure. Thanks so much for sharing!

Janet - Thanks for hosting Bobbi!

Margot, I'm glad you stopped by! Especially since all you long, lean California girls need some bulking up. This recipe should do the trick. You never know when there'll be a cold snap and you'll be glad of the insulation.

Eat with a tiny spoon? Okay, I'll try. One of my New Years goals is to luxuriate. By the way, I've read some of Bobbi's novel, "Cream in your Coffin". A super tale. Come-on publishers, what's the hold-up. ;-)

Eve: You're the sweetest! In Paris, two summers ago, we were regulars at a gelato place, Amorino, on rue Daguerre. They served their amazing gelato with wee, tiny spoons. Their dark chocolate gelato was heaven, eaten in those little morsels.

Bobbi, I always buy tiny spoons when I see them at the fleamarket or reasonably priced antique stores. I tie them up with jam for house gifts, but I have one with Ben Franklin on it (I'm originally from Philly) that I use for special treats like chocolate pudding! Like minds..it seems to make it last longer..

Arrgh! Cream with Your Coffin. I can't believe I got it wrong.

Janet, that's a great idea. I often see the little spoons around antique shops but had never thought about them for the jam gifts. Lucky Ben Franklin has had a few tasty treats over time!

Eve, I write it that way often, as well. And either way it means the same thing! :-)