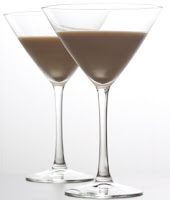 So with this exciting alcoholic Food Holiday, break out the Brandy and Creme de Cacao!

In a shaker half-filled with ice cubes, combine the brandy, creme de cacao, and half-and-half. Shake well. Strain into a chilled cocktail glass and garnish with the nutmeg

I'm not sure where I found the original recipe for Brandy Alexander Brownies, but I found a similar recipe at The Pioneer Woman that includes a recipe for Brandy Alexander Icing. My original recipe below includes optional walnuts, and I don't usually frost brownies. They're plenty rich the way they are, but I do use more chocolate, but then I'm always Dying for Chocolate.

Directions:
In mixing bowl cream together the butter and sugar till fluffy.
Add eggs; beat well.
Blend in cooled chocolate, creme de cacao, and brandy.
Stir together the flour, baking powder, and 1/4 teaspoon salt.
Stir into creamed mixture.
Stir in  chopped nuts (optional)
Spread in a greased 9x9x2 inch baking pan.
Bake at 350° for 20 to 25 minutes.
Cool.
Cut into bars.

Optional: Frost with Brandy Alexander Frosting before cutting into bars!

Mix all together!
Posted by Janet Rudolph at 7:26 AM