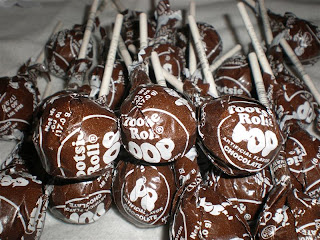 I loved licking the hard outside to get to the chewy center. And, at some point, I used to chomp on the lollipop to make that crunchy hard candy shell combine in my mouth with the chewy tootsie roll center.

And, for those of you who prefer their Tootsie Pops in a Glass, here's a cocktail recipe to celebrate the day.

Posted by Janet Rudolph at 9:04 AM