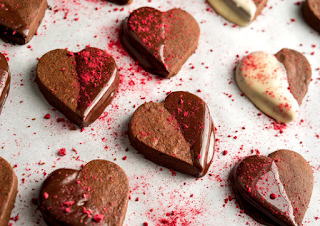 
The history of shortbread goes back to at least the 12th century and originally started life as ‘biscuit bread’; biscuits that were made from left-over bread dough that was sometimes sweetened and dried out in the oven to form a hard, dry rusk. Over time the leavening was lost and exchanged for butter, making it an expensive fancy treat that was only bought for celebrations such as Christmas and Hogsmanay (Scottish New Year). There are similar ‘breads’ outside of Scotland such as Shrewsbury cakes and Goosnagh cakes.

So for today's Shortbread Holiday, here's a recipe for Chocolate Shortbread Hearts from Melissa Clark that appeared in the New York Times several years ago. You can make it today for National Shortbread Day or bookmark this recipe for Valentine's Day!

The dough is basic, and you can decorate in so many different ways! I love versatile recipes, don't you? These buttery shortbread cookies are dunked partway in melted chocolate and sprinleed with freeze-dried raspberries. I found some really good freeze-dried raspberries at Trader Joe's, and now always have them in my pantry. You can also use flaky sea salt, chopped pistachios, or coconut to top the dipped chocolate!

Tips:
Be sure not to roll the dough thinner than 1/2 inc or the cookies might break.
Use European-style butter. It's higher in butter fat and the cream was cultured before churned. I use French butter.

Posted by Janet Rudolph at 7:34 AM