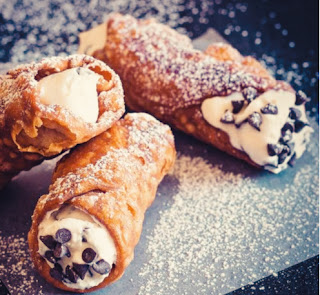 Today is National Cannoli Day! I love all these food holidays because they remind me that there are so many different chocolate foods. One of my all time favorite desserts: Cannoli. I used to have these in South Philly, either from the bakeries or for dessert at the many Italian restaurants. Traditionally cannoli come from the Palermo and Messina areas and were prepared as a treat during Carnevale season, but it quickly became a year-round staple in Sicily. Cannoli are fried and stuffed with sweet ricotta cheese with chocolate chips. Heaven.

Many Italian bakeries and markets sell cannoli...just in case you don't feel like making them today!

For Shell Dough:
In medium bowl, sift together flour, sugar, and salt. Work butter pieces into flour with your fingers until mixture becomes coarse and sandy. Add egg yolk and white wine and mix until it becomes  smooth dough. Spread piece of plastic wrap on flat surface and place dough in center. Wrap plastic loosely around it and press dough to fill gap. Flattening dough will mean less rolling later. Let it rest in fridge for a few minutes while you make filling.

For Filling:
In medium bowl, whisk ricotta until smooth. Sift in powdered sugar, cinnamon, and allspice. Mix to blend. In separate bowl (or in bowl of electric mixer fitted with whisk attachment), beat heavy cream until fairly stiff. Using rubber spatula, gently fold cream into ricotta mixture. Stir in chocolate chips.
Lightly zest exterior of lemon and stir it into ricotta. Refrigerate for half hour to hour.

Tip:
If ricotta has an excess of liquid, drain over strainer for at least half hour before making filling. Make and fry shells and filling. Don't fill shells with cream until you are ready to eat them. Everyone loves a crispy cannoli.
Posted by Janet Rudolph at 7:08 AM