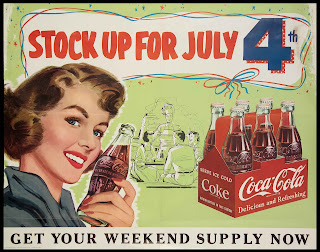 Directions
Sift together flour and sugar. Heat to boiling point the butter, cocoa, and Coca-Cola. Add to flour and sugar mixture. Stir to blend. Add buttermilk, soda, eggs, salt, and vanilla. Stir with spoon until well blended. Pour into greased and floured oblong pan (Pyrex dish). Bake at 350 degrees for 30-35 minutes. Batter will be thin. Ice while hot.

Heat to boiling point -- butter, cocoa and Cola-Cola. Add confectioners' sugar and vanilla; stir to blend. Using a fork, make holes in hot cake and pour hot icing over it.

Posted by Janet Rudolph at 8:54 AM

This is truly amazing.. Tbh i have never heard of this cake until i came across this recipe of yours but really thank you for sharing i will surely give it a try. :)