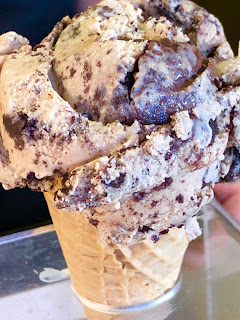 Yesterday was National Ice Cream Cone Day. In honor of the day, I had an ice cream cone of Screaming Mimi's Mimi's Mud..my favorite Sebastopol chocolate ice cream. I chose a sugar cone, but Frank had a double waffle cone. Both were great. So here's a bit of history about ice cream cones from the International Dairy Foods Association. As I've mentioned many times on this blog, you can find all kinds of food history and recipes at Food Association sites.

HISTORY OF THE ICE CREAM CONE

The first ice cream cone was produced in 1896 by Italo Marchiony. Marchiony, who emigrated from Italy in the late 1800s, invented his ice cream cone in New York City. He was granted a patent in December 1903.

Although Marchiony is credited with the invention of the cone, a similar creation was independently introduced at the 1904 St. Louis World's Fair by Ernest A. Hamwi, a Syrian concessionaire. Hamwi was selling a crisp, waffle-like pastry -- zalabis -- in a booth right next to an ice cream vendor. Because of ice cream's popularity, the vendor ran out of dishes. Hamwi saw an easy solution to the ice cream vendor's problem: he quickly rolled one of his wafer-like waffles in the shape of a cone, or cornucopia, and gave it to the ice cream vendor. The cone cooled in a few seconds, the vendor put some ice cream in it, the customers were happy and the cone was on its way to becoming the great American institution that it is today.

At the same time, Hamwi was busy with the Cornucopia Waffle Company. In 1910, he founded the Missouri Cone Company, later known as the Western Cone Company.

As the modern ice cream cone developed, two distinct types of cones emerged. The rolled cone was a waffle, baked in a round shape and rolled (first by hand, later mechanically) as soon as it came off the griddle. In a few seconds, it hardened in the form of a crisp cone. The second type of cone was molded either by pouring batter into a shell, inserting a core on which the cone was baked, and then removing the core; or pouring the batter into a mold, baking it and then splitting the mold so the cone could be removed with little difficulty.

In the 1920s, the cone business expanded. Cone production in 1924 reached a record 245 million. Slight changes in automatic machinery have led to the ice cream cone we know today. Now, millions of rolled cones are turned out on machines that are capable of producing about 150,000 cones every 24 hours.

Directions
Whisk together eggs and sugar in a large bowl until frothy. Whisk in butter, milk, and vanilla. Gradually whisk in flour and salt until smooth. Batter should be thin; you can stir in more milk if needed.
Heat small skillet or griddle over medium heat. Brush pan lightly with oil. Pour about 1/4 cup of batter onto skillet and turn to spread out batter into thin circle. When underside is golden brown, flip over and cook until golden on other side. Remove from pan and form into cone while it's hot, squeezing end to seal. Place on wire rack to cool and harden completely.
Repeat with remaining batter.
Posted by Janet Rudolph at 7:56 AM