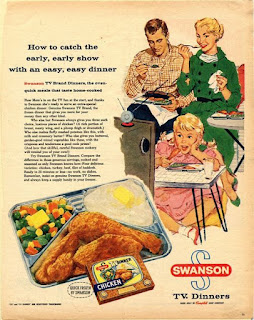 I shouldn't be surprised, but I was, to find out that there is a TV Dinner Day on the Food Holiday list.  TV Dinners became popular in the 1950s. After a busy day, families would put frozen dinners (they were individually packaged) in the oven, and out would come a full meal of 2 to 4 courses. Traditionally these were eaten on TV trays in front of the TV where the family would sit on the sofa or chairs and watch their favorite TV shows together.

This was not the case in my family. We ate as a family, fresh food prepared by my grandmother, mother, one of my aunts, or the help. Yes, we had help. Dinner time was when the family gathered and discussed school, work, politics, art, music. We were not allowed to watch TV. Perish the Thought! Oh how I envied the children in the ads and commercials. I was a TV junkie. Still am. I must reveal, though, that I have never eaten a TV Dinner. Never. They wouldn't have been in our freezer, even if someone 'dropped by' as it says in one of the ads below. The food on our table was always expandable to accommodate the numerous people who did stop in at dinner time. My grandmother was good at stretching everything. She didn't have to rely on a frozen prepackaged dinner.

The term TV dinner is a trademark originally used for a brand of packaged meal developed in 1953 by C.A. Swanson & Sons (the name in full was TV Brand Frozen Dinner). The original Swanson's TV Dinner came in an aluminum tray and was heated in an oven. It was an individual portion. TV dinners required very little preparation and contained all the elements for a single-serving meal. A TV dinner usually consisted of a cut of meat, usually beef or chicken; a vegetable, such as peas, carrots, corn, or potatoes; and sometimes a dessert.

Because this is a chocolate blog, I want to let you know that occasionally TV Dinners had a brownie  or chocolate pudding for dessert. More likely they didn't.

So in honor of TV Dinner Day, here are several Retro Ads. Always fun to see. Be sure to scroll down and watch the Retro TV Ad! 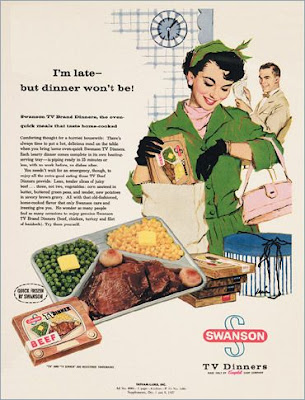 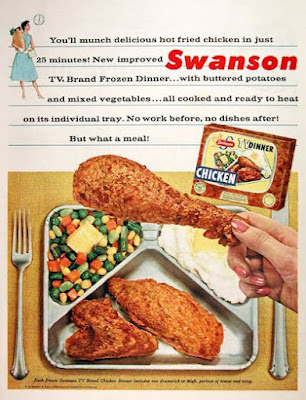 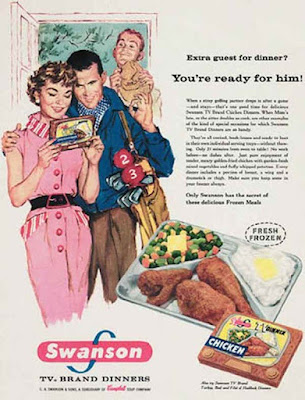 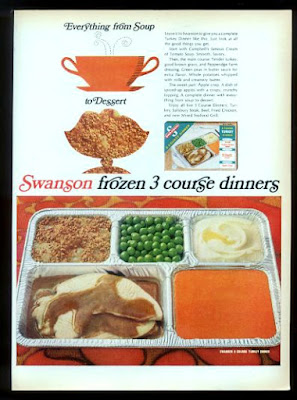 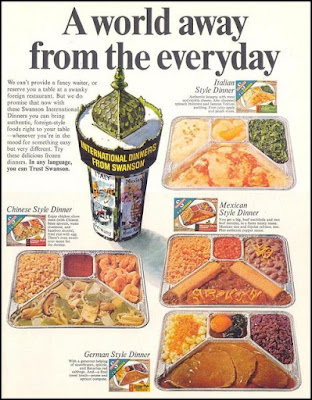 Posted by Janet Rudolph at 8:44 AM

I don't know if you saw my recent post but it looks like I won't be blogging for a while. It's up to you to keep reminding everyone of all these delicious food days, lol...I should just pass my notes onto to you, lol...

Thanks for sharing, Janet...I better pin one of these cool ads:)