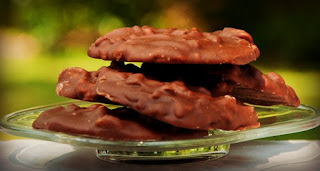 I'm just back from Bouchercon, the World Mystery Convention, that was held this year in New Orleans. What a Party! Thanks to everyone who helped make this one of the best Bouchercons ever!

Many of you know, my 'other' world is all about mysteries, so I took this opportunity to spend some time away from the convention to sample pralines in New Orleans. I know it's tough, but someone has to do it.

What I found were many variations of Pralines, so I'm posting several recipes, for you to make at home. Of course, if you're in the Big Easy, you'll want to sample, as I did, and buy a few different kinds. Each of the following recipes has its virtues, and none has any vices. I, of course, add Chocolate to my Pralines. No big surprise there! So all three recipes feature chocolate and nuts!

PRALINE:
1) a confection of nuts and sugar: as in almonds cooked in boiling sugar until brown and crisp
2) a patty of creamy brown sugar and pecan meats

If you associate Pralines with the South, you'd be right! The original praline was a sweet confection made of almonds and some sort of creamy sugary caramelized coating. Lots of stories about how the Praline came to New Orleans and the South. One is that Pralines were first concocted in the home of 17th century French diplomat Cesar du Plessis Praslin by one of his chefs. The name "Praslin" eventually evolved into "praline." I don't buy that story since they were already popular in Europe in a slightly different version. Another story is that pralines were brought over from France by the Ursuline nuns, who settled in New Orleans in 1727. This makes sense since Pralines were already in the French tradition. Almonds were in short supply, so cooks began substituting the nuts of the native Louisiana pecan trees, thus the modern pecan pralines were born. Praline pecans were known as individual pecans covered in the sugary coating. The new pecan pralines quickly spread throughout New Orleans and became a common confection in the area. 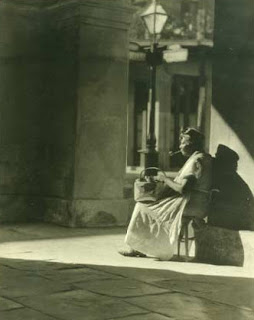 Pralinières were women who used to sell pralines on the streets of the French Quarter in New Orleans during the mid-to-late 19th century, providing a unique entrepreneurial opportunity to les gens de couleur libres (free people of color). Not only was being a pralinière a source of income, it was a means of providing for oneself without any strings attached. This was a rare situation for economically less-fortunate, but resourceful women of that time period, who were often employed as indentured servants or forced by need and without choice into plaçage, as kept-women of wealthy businessmen. (Read more about Praline Sellers of Old New Orleans here)

Because New Orleans was a thriving port, people from all over the world came through, and the praline spread with them. Many people are unaware of the candy’s historical origin, and the praline is thought of as a southern confection not necessarily specific to New Orleans. Some believe the pecan praline is a Texan candy, whereas others assume it came from Savannah. The pronunciation of the candy is a bit of a point of contention as well. In New Orleans and along the Gulf Coast, where there are many communities settled by the French, the pronunciation is prah-leen, with the long aaah sound, which is closer to that of the candy’s namesake du Plessis-Praslin. Other regions of the country, including parts of Texas, Georgia, and New England have anglicized the term and pronounce it pray-leen. Other terms for pralines include pecan pralines, pecan candy, plarines and pecan patties.

Whatever you call it, you're going to love these recipes for Chocolate Pralines. They're simple to make. The first recipe doesn't call for a candy thermometer, but get one ready for the next two recipes. Candy thermometers are easy to work with, and if for some reason you don't have one, you can always use the water test.

This first recipe is adapted from Sunset Magazine.

Directions
Place almonds in 9-inch pie pan. Bake in 300° regular or convection oven, shaking pan once, until nuts are golden, 10 to 12 minutes. Coat 12-inch square of foil lightly with vegetable oil (about 1 teaspoon).
In 8- to 10-inch frying pan over medium-high heat, combine sugar, butter, corn syrup, and milk. Stir occasionally until mixture is bubbly and golden, about 5 minutes. Add cocoa and stir until smooth, then stir in toasted almonds. Pour mixture onto oiled foil and spread about 1/4 inch thick. Let cool until solid, about 10 minutes. Break praline into 6 to 8 large chunks.

Directions
In heavy saucepan combine the sugar and cream.
Heat to 240 degrees (115 C) on candy thermometer (stirring constantly).
Remove from heat, stir in butter and chocolate.
Cool mixture to 110 degrees F (43 C).
Stir in pecans.
Drop by teaspoonfuls onto wax paper and allow to cool and harden.

Want a kick with your Chocolate Pralines?  Homesick Texan has a terrific recipe for Mexican Chocolate Pralines.  Here's her recipe, but be sure and read her post about her first attempts.. and to see her sensational photos. Yes, bacon can become an ingredient!

Directions
In oven set at 350 degrees, roast pecans for 10 minutes.
In large pot, melt together on medium heat chocolates, sugars, pecans, milk, butter, cinnamon, orange zest, Cayenne and sea salt, stirring occasionally. Place candy thermometer in pot to monitor heat. When it reaches 235 degrees, remove from fire and add vanilla and stir pot for two minutes. There should be bit of shine to the candy but candy will be a bit more thick.
Scoop pralines onto parchment paper. (If too stiff, add warm water to mixture.) Let cool for an hour and remove. They will still be a bit shiny but will lose that shine after a few hours.

Note from Homesick Texan: If you want to add bacon to these, fry up four slices, crumble them and stir into praline when you add the vanilla.

These are unbelievably fabulous!!!!