San Francisco Beer Week is upon us. January 22-January 31. San Francisco is home to over 100 breweries who produce some of the best beer in the U.S. I recently attended a launch for Beer Week, and I tasted a lot of Chocolate Beers and Chocolate Ales, as well as beers that have definitely chocolate notes. I liked them all. Since I often pair chocolate with beer for tastings, I thought I'd mention a few events coming up, as well as some special Chocolate Ales. They're going to be lots of other Beer Events, too, all over the Bay Area in Bars, Breweries, restaurants, movie theatres, and even the Pinball Museum. San Francisco knows how to throw a party!

The San Francisco Brewers Guild organizes SF Beer Week, and people come from all over the world. This great festival is usually held in February (so mark your calendar for next year), but because San Francisco is hosting the Super Bowl, SF Beer Week was moved up. Brewers traditionally release their new beers during Beer Week, and I certainly tasted a lot of them at the press launch. Fabulous. Here's a short-list of fun ones. 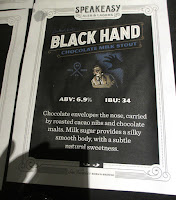 One of my favorite Chocolate Beers is Speakeasy's Black Hand. It's made with TCHO Ghanaian Roasted Cacao Nibs. It's a chocolate milk stout that's full-bodied and creamy, with chocolate notes. I also love the brewery graphics.. but then I'm a mystery person.