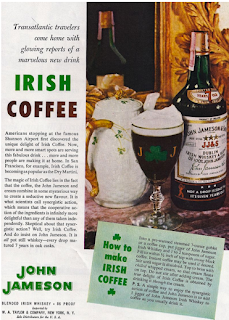 On my first day in California I was lucky to hitch a ride with a visiting dignitary. The day's tour of San Francisco included the hills of San Francisco, Sonoma County, the Renaissance Fair, Sausalito, Fisherman's Wharf, the Palace of Fine Arts, Cliff House, the Golden Gate Bridge and a stop at the Buena Vista Cafe for an Irish Coffee. I saw more of the San Francisco Bay Area on that one day than I did during the next ten years.

Irish Coffee at the Buena Vista Cafe is a very San Francisco tradition. The drink was invented there in 1952. The recipe was a collaborative effort between Jack Koeppler, the Buena Vista’s owner, and Stanton Delaplane, a well-known international travel writer and San Francisco Chronicle columnist.

The official story of Irish Coffee tells of the perseverance and repeated attempts of Koeppler & Delaplane and even a trip to Shannon Airport, where a forerunner of Koeppler’s vision was served. The whipped cream posed a problem, but the input of a prominent dairy farmer turned Mayor of San Francisco, solved the problem: age the cream for 48 hours and froth it to a precise consistency so it would float on top of the hot coffee, to Koeppler’s specifications. 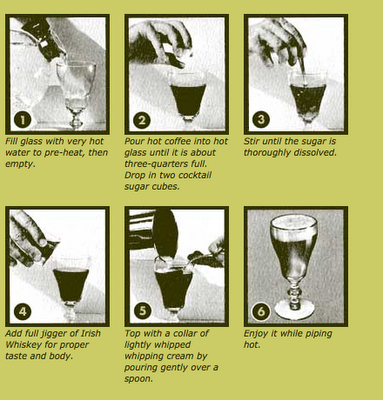 So if you're in San Francisco today, it's a big day at the Buena Vista. Stop by and raise a glass!

But this is a Chocolate Blog, so once again I wanted to post a recipe that includes Chocolate and the day's 'food' holiday.

Directions
Put Chocolate, 1/3 cup of cream, and 1/4 teaspoon of espresso powder in heatproof bowl. Put bowl in skillet of barely simmering water. Stir frequently until chocolate is completely melted and smooth. Remove bowl from skillet, stir in whiskey, and set aside.
In heatproof medium bowl, whisk eggs with 1 tablespoon water and 2 tablespoons of sugar until well blended.
Put bowl in skillet and whisk eggs constantly (to prevent from scrambling) over barely simmering water until they register 160 degrees F. on instant-read thermometer.
Remove bowl from skillet and beat at high speed with electric mixer until eggs have texture like softly whipped cream, 3 to 4 minutes.
Fold one quarter of eggs into chocolate.
Scrape chocolate mixture over remaining whipped eggs and continue to fold just until evenly incorporated.
Divide mousse into ramekins. Chill at least 1 hour, or until set, before serving.

Whip heavy cream to soft peaks. Add Baileys Irish Cream and whisk until combined.
Spoon small amount of whipped cream onto the top of each mousse ramekin.
Posted by Janet Rudolph at 10:02 AM

Ooooooo la la, Janet. I sure wish you were here with your Irish Coffee Mousse of course:)