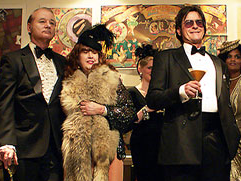 From the Brandyalexander website comes the history that Movie Stars have consumed Brandy Alexanders on sets of movies and TV shows and during celebratory events throughout  the last century.  Among the famous drink calls are by Jack Lemon in Days of Wine and Roses. In one scene Lee Remick receives a Brandy Alexander and is impressed with the chocolate flavor, yet smooth taste of the drink. In the pilot of the Mary Tyler Moore show, Mary asks for a Brandy Alexander when asked if she would like a drink at her job interview, and Peggy on a blind date in an episode of Mad Men, Indian Summer orders a Brandy Alexander.

So for this exciting alcoholic Food Holiday today, break out the Brandy and Creme de Cacao! 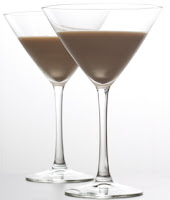 Directions
1. Sprinkle gelatin over cold water in saucepan. Add 1/3 cup of sugar, salt and egg yolks. Stir to blend.
2. Heat over low heat while stirring until gelatin dissolves and mixture thickens. Do not boil.
3. Remove from heat, and stir in cognac and creme de cacao. Chill until mixture starts to mound slightly.
4. Beat egg whites until stiff. Gradually beat in remaining sugar and fold into thickened mixture. Fold in 1 cup of whipped cream. Turn into crust. Chill several hours or over night.
5. Garnish with remaining cream and chocolate curls.
Posted by Janet Rudolph at 12:39 PM