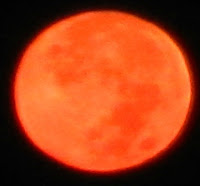 This morning there was the most spectacular Harvest Moon I've seen in years. It was a dark orange and huge! Of course, it's going to be hot today, so I shouldn't be that surprised. However, what really surprised me was that I was able to catch this shot of the moon with my tiny Canon  ELPH 310HS. What a surprise. O.K. it's a bit blurry, but still. Looks like pumpkin to me!

FYI: These brownies are more cakelike than chewy. With that in mind, enjoy!

Here's a link to another Pumpkin Brownie Recipe on The District Chocoholic that also uses Libby's Pumpkin.

Do you have a favorite Pumpkin Brownie recipe? Leave a comment and link!
Posted by Janet Rudolph at 7:18 AM

What a great moon photo!

That is some shot, Janet. You were so lucky to catch it. I can't think of a better way to celebrate the Hunter's Moon of October but with some Pumpkin Brownies!