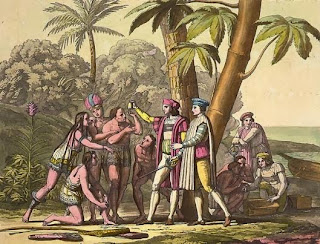 In the U.S., we celebrate Columbus Day.. although some cities (mine) and states people call it Indigenous People Day. In terms of chocolate, though, Christopher Columbus was the first European to come in contact with cacao. On August 15, 1502, on his fourth and last voyage to the Americas, Columbus and his crew encountered a large dugout canoe near an island off the coast of what is now Honduras. The canoe was the largest native vessel the Spaniards had seen. It was "as long as a galley," and was filled with local goods for trade -- including cacao beans. Columbus's crew seized the vessel and its goods, and retained its captain as his guide.

Later, Columbus' son Ferdinand wrote about the encounter. He was struck by how much value the Native Americans placed on cacao beans, saying: "They seemed to hold these almonds [referring to the cacao beans] at a great price; for when they were brought on board ship together with their goods, I observed that when any of these almonds fell, they all stooped to pick them up, as if an eye had fallen."

At first, however, the cocoa beans were neglected. Despite the bitterness of the drink produced, Columbus claimed the resulting concoction was a "divine drink which builds up resistance and fights fatigue. A cup of this precious drink permits a man to walk for a whole day without food".

What Ferdinand and the other members of Columbus' crew didn't know at the time was that cocoa beans were the local currency. In fact, in some parts of Central America, cacao beans were used as currency as recently as the last century.

While it is likely that Columbus brought the cacao beans he seized back to Europe, their potential value was initially overlooked by the Spanish King and his court. Far more exciting treasures on board his galleons meant the cocoa beans were ignored. It was his fellow explorer, the Spanish Conquistador Don Hernán Cortés, who first realized their commercial value. He brought back three chests full of cocoa beans to Spain in 1528 and very gradually, the custom of drinking the chocolate spread across Europe.

It was still served as a beverage when the Spanish first brought chocolate back to Europe. Cortez, described chocolatl as "the divine drink ... which builds up resistance and fights fatigue," and his countrymen, conceived the idea of sweetening the bitter drink with cane sugar.

The recipe for the sweetened frothy beverage underwent several more changes in Spain, where newly discovered spices such as cinnamon and vanilla were added as flavorings. The original chili pepper that made the spicy drink was replaced by sugar to make a sweet beverage. The sweetened chocolate beverage was a luxury that only a few could afford.

By the 17th century, the drink became common among European nobility. In London, chocolate was more widely available, and those who could afford it could enjoy the drink in coffee and chocolate houses.