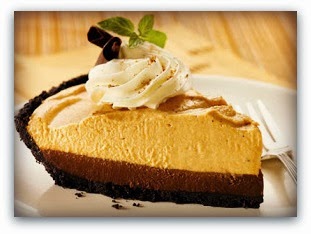 Today is Canadian Thanksgiving, and because I think all holidays should be celebrated  with Chocolate, I know you'll love this Double Layer Chocolate Pumpkin Mousse Pie. Perfect  for the holiday!  Since it's Canadian Thanksgiving, this recipe is from the Dairy Farmers of Canada website Dairy Goodness. Hope my North of the Border friends have a wonderful celebration. And, for those in the U.S., this Pie is fabulous for our Thanksgiving in late November.

Photo: Dairy Farmers of Canada
Posted by Janet Rudolph at 7:13 AM