I hail from Philadelphia, so I loved this advertisement when I stumbled over it. "Instantaneous Chocolate!"... what's not to like? And only 75 cents a can! Stephen F. Whitman was, of course, the founder of Whitman's Chocolates. 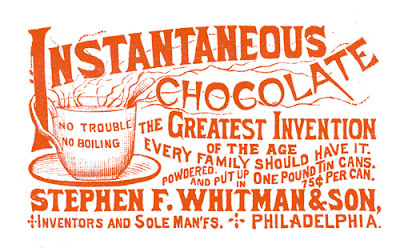 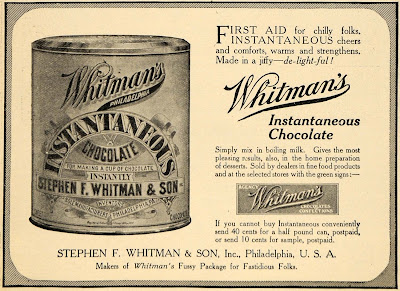 History of Whitman's from the Russell Stover site.

In 1842, a 19-year-old Quaker named Stephen F. Whitman set up a small "confectionery and fruiterer shoppe" on Market Street near the Philadelphia waterfront. His shop attracted Philadelphians from all walks of life, leading citizens to sailors. Thanks to exotic ingredients taken to Whitman by well-traveled sailors, his candies quickly gained renown across the Northeast.
Whitman was an innovative marketer; he knew that presentation could be as important as taste to some customers. So he created beautiful packaging and well-crafted advertising campaigns that focused prospective customers on the quality of his candies. Whitman's became a familiar name, thanks to ads in newspapers and magazines as early as 1857.
Business thrived, and the company's facility in Philadelphia expanded. New products, including tinned Instantaneous Chocolate, brought acclaim and boosted profits. In 1869, the next generation took the reins when Horace Whitman replaced his father as company president. Horace introduced America to cellophane, a then-wondrous material that helped keep candy fresh, colorful and clean.
By 1907, Whitman's Candies were appearing on the shelves in "better drug stores" across the region. Four years later, Walter Sharp stepped in as president; he developed new products and initiated the company's money-back guarantee that continues to this day. Sharp also created the Whitman's Sampler®, an assortment of the company's best-selling chocolates. Inspired by a cross-stitched sampler hanging in his home, Sharp worked with a skilled employee to create the sampler that's reproduced on Sampler boxes to this day. By 1915, the Sampler had become America's best-selling box of chocolates, a position it still holds today.

Posted by Janet Rudolph at 9:16 AM