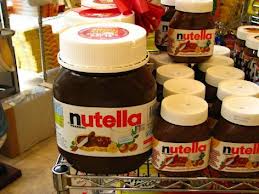 Five Tons of Nutella Stolen in Germany:
The jars of hazelnut spread were in a parked trailer in the center of the town of Bad Hersfeld, the U.K. Express said, citing a report Monday from German news agency dpa. The haul, taken some time over the weekend, is valued at approximately 15,000 euros.

Police aren't sure how many culprits they are looking for, but it is believed the same thieves stole a truckload of Red Bull from the same location a few weeks ago, and then about $40,000 worth of coffee two weeks ago. Bad Hersfeld is around 400 southwest of Berlin.

Here's a Nutella recipe that the perps might be able to use: increase recipe by 10,000x. Check proportions. :-)

In flat-ish dish pour 1/2 batter and soak both sides of 2 'sandwiches'. (Hint: don't use all the batter at once or your first Stuffed French toasts will soak it all up and you won't have any batter left for the others).
Remove and fry. Turning over, of course.
Dip second two French toast sandwiches, soak, and fry about 1-2 minutes on first side. Flip. They're done when they're golden brown and crisp.
Remove from heat, dust with powdered sugar and eat. Fabulous!

Posted by Janet Rudolph at 8:55 AM

With all the ingredients that were takien, I had to laugh when I visualized the worlds largest brunch !