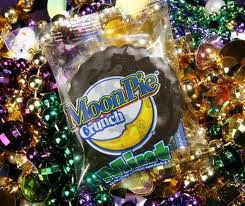 Moon Pies are a very Southern snack food, and Moon Pies in their packaging are thrown from floats during Mardi Gras in Mobile, AL, and other towns along the Missippi Gulf Coast. They might not have the allure or shine of purple (justice) green (faith) and gold (power) beads, but they are a tradition, and people covet them--and they're great to eat! Catching items from floats means good luck, but sometimes, as in this case, it means a tasty treat!

I have a good friend from Mobile, AL, and Moon Pies are definitely a Mardi Gras throw there. The first group to throw these chocolate covered marshmallow treats were the Maids of Mirth in 1956. The Chattanooga MoonPie company supplied the MoonPies after crackerjack boxes were banned because of dangerous sharp corners, and the  MoonPie became a traditional "throw" of Mardi Gras "krewes" in Mobile, Alabama. The westernmost outpost of the Moon Pie as an important Carnival throw is Slidell, Louisiana, which has a parade by "The Krewe of Mona Lisa and MoonPie." The Moon Pie Company actually now offers smaller bite size individually wrapped MoonPies for throwing off floats.

So what is a MoonPie? Although it's often mistaken for a Whoppie Pie, it's not the same thing at all! A  moon pie is a sandwich composed of brittle soft crumbly graham crackers and thick soft spongy marshmallow and then covered with rich dark chocolate.

The Moon Pie Brand began in 1917 with its trademark registered on Jan 1, 1919 in Chattanooga. According to the MoonPie Company, the story goes that Earl Mitchell, Sr, a bakery salesman, visited a company store that catered to coal miners. The Miners wanted something solid and filling because they didn't get time to break for lunch. About how big? he asked. A Miner held out his hands, framing the moon, and said, "About that big!" When Mitchell returned to the bakery, he notices some workers dipping graham cookies into marshmallow & laying them on the window sill to harden. The idea of adding another cookie and a generous coating of chocolate was tried, and samples of this new MoonPie were distributed. It had a great response and became a regular item for the bakery. 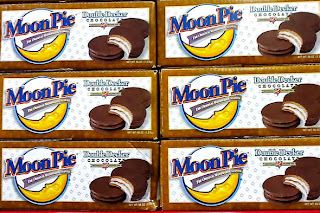 During the 1930s, the MoonPie found its place in Southern folklore as part of the 'workingman's lunch". Coal miners and laborers could enjoy the biggest snack on the rack, a MoonPie, and a 10 oz RC Cola, each for a nickle. This inspired the 1950s country music hit "Give me an RC and a MoonPie. Double Decker MoonPies with three cookies and two layers of marshmallow appeared during the 1960s, and they were easier for vending machines.

So if you're in Alabama or Louisiana for Mardi Gras today, try to catch some MoonPies!

Want to make your own Moon Pies? Recipe links.

I've tried a moon pie once at a restaurant here in Sydney and it was so delicious!

At a restaurant probably better than these.. but still they're a tradition. I just love, love your blog..

It's difficult to find Moon Pies in Chicago, so when I do, I make sure to buy a good amount!

I love coming to this blog. There is always new information on wines and brings together people who love all types of wine together to discuss.