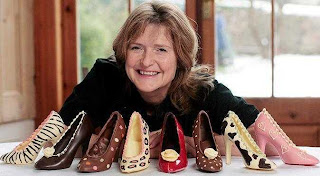 I love shoes. Yes, like chocolate, it's a passion. I don't necessarily wear high fashioned shoes, since I'm really into comfort, but I do covet them. So why not combine the two passions? That's exactly what cake maker Frances Cooley did.

Frances Cooley is the owner of Clifton Cakes in Bristol, and she launched a line of chocolate shoes after discovering a vintage chocolate shoe mold in Belgium. She added her own designs to the shoes, and she can barely keep up with demand despite the £21 price tag. She said: ''People are wowed about them because it's the perfect gift for a woman – chocolate and stiletto shoes put together. 'They've been selling like hot cakes. This past year sales have been incredible. 'They've been sold alongside pink champagne at some stores as well, and I could see someone drinking the champagne right out of the shoe.''

To create the mouthwatering footwear she hand-pipes a design into the mold and fills it with tempered Belgian chocolate which shrinks slightly as it cools. She then pours out the excess and lets the coated mold to set before finishing each shoe by hand with handcrafted frills and rosettes. Her unique designs have become so popular that they have garnered attention from high-end retailers in London – including luxury department store Liberty. 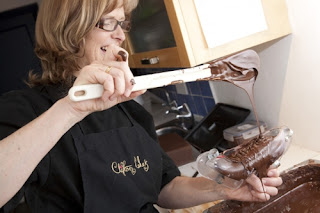 She added: ''A friend, who is a French chef, had a meeting at Liberty in London and he suggested that I accompany him in case they might be interested in selling my cakes. 'They were immediately interested in the shoes and started talking about packages and designs. 'About six months ago I got my first order from them, and as well as selling my products, Liberty has also used my chocolate shoes for promoting events.''

And, in case you're wondering, she makes handbags, too! 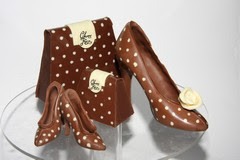 Posted by Janet Rudolph at 7:05 AM

Keep up this great blog and keep great information coming for new people like me.

Wow, I love them! They really are beautiful, and such a fun gift idea:-) I love how she found a mold....it is like one person's garbage, is another person's treasure:-) Thank you for sharing! Take care, Terra