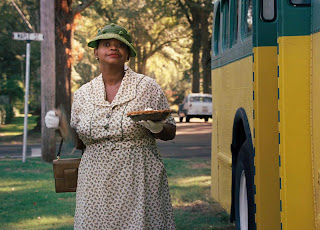 If you’ve seen The Help, you know that Minny’s Chocolate Pie has to be the main dessert on your Oscar Party menu this Sunday night.

The recipe below was used to make a movie prop and is the actual recipe that was used in the film. Newspaper columnist Lee Ann Flemming made a total of 53 of these chocolate pies for the movie, and this is the recipe she used. The original recipe appeared in the August 2011 Food & Wine issue. 12 of the pies that Lee Ann Fleming made were vegan and gluten-free versions that she prepared in just one day for actress Bryce Dallas Howard. Just an FYI, the "real" super fudgy version isn't vegan or gluten-free. You can make your own crust, but Flemming used packaged.

In  case you haven't seen the movie, The Help's ending hinges on a secret involving Minny's famous chocolate pie. However, this recipe is fabulous and easy and definitely a Hilly Two-Slice, without that 'other' ingredient.

Directions
Preheat oven to 350°.
Ease pie crust into 9-inch pie plate and crimp the edges decoratively. Prick the crust lightly with a fork. Line t crust with foil or parchment paper and fill with pie weights or dried beans. Bake for 15 minutes or until set. Remove the foil and weights and bake for about 5 minutes longer, just until the crust is dry but not browned.
Meanwhile, in a bowl, whisk sugar with cocoa powder, butter, eggs, evaporated milk, vanilla and salt until smooth.
Pour illing into pie shell and bake for about 45 minutes, untilfilling is set around edges but a little jiggly in the center. Cover the crust with strips of foil halfway through baking.
Transfer pie to rack and let cool completely before cutting into wedges.
Serve with whipped cream.

Minny's Chocolate Pie can be refrigerated overnight.
Posted by Janet Rudolph at 4:29 AM

I LOVED that movie! And, as you know Janet, I'm not much of a movie person. I can't believe you found the recipe!

Thank you so much for sharing...I'll be including this link in my post on Sunday!