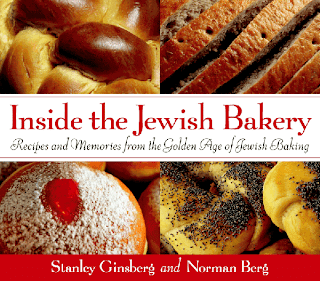 Today I welcome Stanley Ginsberg, co-author of Inside the Jewish Bakery: Recipes and Memories from the Golden Age of Jewish Baking (Camino Books, 2011).

I love this cookbook not just for the great chocolate and bread recipes, but for the historical and cultural insights into Jewish life in America and Europe.  I highly recommend Inside the Jewish Bakery to bakers of all levels, as well as historians. You don't have to be Jewish to love it!

Be sure and go to the website for "The Unpublished Chapters." Thanks, Stanley, for stopping by and sharing your CHOCOLATE memories and insights.

STANLEY GINSBERG: Me and Chocolate

When I was a kid, back in the 40s and 50s, chocolate was for special occasions and taken in small doses – a square of Hershey's milk chocolate from the bar my grandma kept squirreled away in her purse, a candy bar at the Saturday matinee (double feature, assorted shorts and 5 color cartoons 5) at the Benson, and the crowning moments when I got to choose one or two pieces (usually the cherry cordials or butter toffees) from the oblong black box of Barton's kosher chocolates that was put out at holiday meals or when company was coming.

As I got older and my family moved up the economic and social ladder, chocolate became less of a novelty. It was always around, and as a teenager I was one of those kids who could work his way through an entire box of Mallomars, carefully picking the chocolate coating off of each one and savoring it flake by flake before chomping down on the now-naked marshmallow and vanilla wafer in anticipation of the next cookie in the box.

The bakeries raised chocolate to a whole new existential plane. Chocolate-enrobed rainbow cookies, chocolate filled lace cookies, almond-fragrant french cookies which a thick dot of chocolate in the center in place of the usual glacé cherry – not to mention Ebinger's blackout cake, a double chocolate high-ratio layer cake filled with chocolate pudding and frosted with chocolate fondant and covered in chocolate cake crumbs. It was to die for – at least until I discovered overdose vehicles like Death by Chocolate, chocolate mousse cake and chocolate lava cake.

Funny thing is, I never thought of myself as a chocoholic, since my cravings are infrequent and no longer excessive – thinking back to the time I finished almost 2 pounds of extra dark block chocolate in the space of an hour and paid for it with severe shakes and tachycardia for the rest of the day. That was 25 years ago, and it was my last true binge.

But of course, having written a baking book it was impossible to stay away from chocolate for very long, especially since the stuff figures so prominently in so many of our recipes. During the testing, I reacquainted myself with goodies I hadn't tasted in years – wonder cake, made with almond paste and marbled with thick veins of pure dark chocolate; chocolate-dipped sandwich cookies and almond horns; and checkerboard cake made with both yellow and chocolate high-ratio cakes, plus lots of chocolate buttercream and dark chocolate enrobing. It was a tough job, but somebody had to do it.

One of the added pleasures of having written the book was learning more about chocolate's history and idiosyncrasies.

I was amazed to learn that the connection between Jews and chocolate goes back to at least the mid-1600s, when Sephardic Jewish merchants from Holland came to the New World to engage in the sugar trade – which in itself is an interesting counterpoint to the pivotal role Jews played in the Eastern European beet sugar industry. But more interestingly, those same Sephardi also were instrumental in laying the foundations of the Dutch chocolate industry when they imported Venezuelan cacao into Holland – and then spread the chocolate gospel into northern France, and, a century later, into England. Fascinating stuff.

I also learned a lot about the chemical and physical mysteries of chocolate, and why it exerts such a powerful hold on those who work with it. I have to confess, the idea of tempering chocolate intimidated me – and I'm not someone who intimidates easily – but the idea of controlling temperatures that carefully was really pretty daunting.

It didn't get any easier – although it did get much more interesting – when I discovered that chocolate forms six different kinds of structures, depending on its temperature at the time of application, and that only one of them – Type 5 – produces the smooth, shiny finish we associate with the highest-quality baked goods. But Type 5 molecules only predominate between 93°F and 97.7° F – equating to 27.3°C to 33.8°C – which is a very narrow band, especially if, like me, you melt your chocolate in a double boiler and not one of those classy, expensive tempering pots they use on the cooking shows.

So I figured it out: Bring the chocolate up above 125° F (52°C), and then drop in chunks of unmelted chocolate and stir it in until the mixture gets to within that Type 5 band – then apply it as quickly as possible, putting it back onto the double boiler as soon as the temp reaches the lower limit. Annoying? Tedious? Yes. Worth the effort? Absolutely.

So that, in a nutshell, is all about me and chocolate, and in closing I'd just leave you with this paragraph that, sadly, never found its way into Inside the Jewish Bakery:

During the Golden Age of Jewish baking, chocolate was – and remains, in the handful of surviving Jewish bakeries – everywhere. Melted and tempered, it enrobed rainbow cookies, seven-layer cakes and checkerboard cakes. Swirls of it marbled wonder cakes. Drops of it decorated the centers of French cookies. Coatings of it graced the ends of sandwich cookies and almond horns. Melted and unsweetened, it is the focal point of chocolate cakes. Shaved, it forms the filling for chocolate babka, schnecken and rugelach. Dried into powder, it performs its magic on butter creams and simple icings.

Email ThisBlogThis!Share to TwitterShare to FacebookShare to Pinterest
Labels: Inside the Jewish Bakery, Stanley Ginsberg

Stanley, this was fascinating. Although, the next time I bake with chocolate, I'm going to be the one shaking - shaking with fear that my chocolate falls outside the glossy temperature band.

My aunt Yonina was in Tel Aviv for a summer vacation and she was amazed with the diversity of sweets in Israeli's bakeries. She was especially thrilled with Ingberlach.

I come from one of those Jewish baking families from Scranton, PA. My Aunt Phyllis' family owned the Linden Bakery and I still dream about all the confections and breads there. Nevertheless, my own grandmother still baked her own desserts - and made her own streudel dough - and I follow her recipes to this day. Breads we always bought at the Linden Bakery, though, and their rye bread can't be beat! (I know such hyperbole is likely to start an argument!)

How fabulous to grow up with a family bakery!

My mother used to buy fresh rye bread at the bakery every day for my Dad's dinner.

Toby Gottfried said: I vividly remember Ebinger's bakery and the black out cake. My favorite was the white cake with the chocolate frosting, slick on the outside and smooth on the inside. Ebinger's was one block from my home on Church Ave and frequented almost daily.