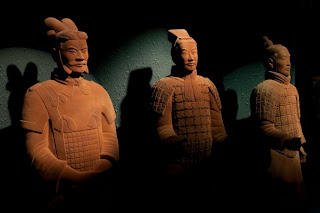 According to Reuters, everything on display was made from chocolate, including a replica of ancient China's famous Terracotta Warriors and the traditional Chinese symbol of the dragon.

Organizers say that the choice of items on display was made based on an effort to unite the East and the West. “We generated the idea of the World Chocolate Wonderland, and it is the first chocolate theme park in the world,” said Paul Chao, the event’s organizer.

Last year's “World Chocolate Wonderland” chocolate theme park held in Beijing drew over a half a million chocolate fans. This year’s exhibit is expected to exceed those numbers as it tries to top last year’s World Chocolate Wonderland sculptures; there will be a Great Wall of China, as well as the army of 500 detailed terracotta warriors. There's also a chocolate BMW that was created out of 80 tons of Belgian chocolate. Some of the most celebrated chocolate makers will be there ready to wow visitors with handmade chocolate truffles and chocolate wine. Tutorials on how to make your own chocolate will also allow visitors to indulge by creating personally designed chocolate creations.

The World Chocolate Wonderland will be open until February 19th, 2012.

Posted by Janet Rudolph at 9:56 AM

That is one delicious exhibit!

I can't help but imagine the warriors having a creamy center.