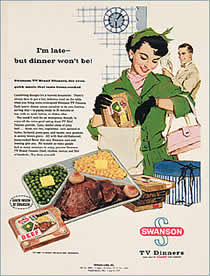 Today is National TV Dinner Day. When I was growing up, the idea of eating in front of a TV was a foreign concept to my family. We weren't allowed to have TV dinners for so many reasons.  I saw them advertised on TV and in the magazines, but dinner was a sacred time for our family. We ate promptly at 5:30. (I learned later that that was really early for dinner.) From 5:30-6:00 no one answered the phone; everyone was at the table. My father, a pediatrician, had to call his 'exchange' and sign out for the half hour.

And, as far as frozen ingredients in a TV Dinner? My mother shopped every day for fresh meat, fish, and bread. I know we had a freezer in the utility room when I was little and in the garage later, but that was for meat or fish she purchased fresh. No TV Dinners at our house.

If it had been allowed, I would have been the only one who wanted to eat dinner off a tray in front of the TV. My father might have wanted to watch Westerns or Cop shows, but they weren't on at 5:30, anyway. My sister would have loved to bring a book to dinner, but that was banned, too. It was family time--a time to talk about the highlights and problems of the day.

But today is National TV Dinner Day, so I thought I'd post a bit of history. Swanson TV Dinners were introduced in the U.S. in 1953. Seven years later, the company stopped calling them TV dinners because they didn't want to discourage people from eating their meals anytime. The generic title TV Dinners, though, did not disappear. 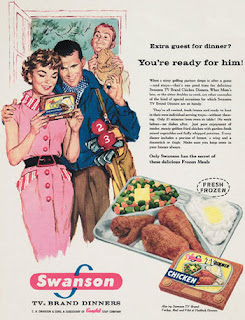 The original TV dinners were on foil trays with foil wrapping and little sections delineated in the tray for different foods. You just heated the entire tray in the oven. O.K. you're saying why not the microwave? Because there weren't any at that time. The TV dinner--heat and serve-- was new and innovative.

According to Wikipedia, the first Swanson-brand TV Dinner produced in the United States was a Thanksgiving meal of turkey, cornbread dressing, frozen peas and sweet potatoes packaged in a tray like those used at the time for airline food service.  The trays proved to be useful: the entire dinner could be removed from the outer packaging as a unit; the aluminum tray could be heated directly in the oven without any extra dishes; and one could eat the meal directly from the same tray. The product was cooked for 25 minutes at 425 °F and fit nicely on a TV tray table. The original TV Dinner sold for 98 cents, and had a production estimate of 5,000 dinners for the first year. Swanson far exceeded its expectations, and ended up selling more than 10 million of these dinners in the first year of production.

The early TV dinners did not have dessert, but that changed in 1960 and sometimes there was an Apple Brown Betty, chocolate pudding, or a brownie.

Other brands followed suit, but not for awhile. There were Swanson TV Dinners and Bird's Eye dinners. Now of course we have lots of prepared meals that can be nuked in the microwave or baked in the oven. It's all about convenience. On the commercial side, Marie Callendar, Claim Jumpers, Banquet, Stouffers, Heatlhy Choice, Lean Cuisine and Hungry Man (Swansons) sell full dinners, but I've never tried them. It's just not the same. There was something so futuristic about the TV Dinner in the tiny foil tray that intrigued me.

This recipe for TV Dinner Buttermilk Brownies is reminiscent of the TV Dinner Brownie on the tray. These Brownies are cake-like with icing, so they might not be my brownie of choice, but they're tasty. Here's a blast from the past.

Directions
In a saucepan, bring butter, cocoa and water to a boil. Cool.
In a large mixing bowl, combine sugar, flour and salt.
Pour cocoa mixture over dry ingredients; mix well.
Combine buttermilk and baking soda; add to batter along with eggs, vanilla.
Mix until well combined.
Pour into a greased 15 x 10 x1 greased and floured baking pan.
Bake at 350 for 20 minutes.
Frosting: Melt butter, cocoa and buttermilk in a saucepan. Stir in sugar, vanilla and salt. Spread over warm cake.
Posted by Janet Rudolph at 6:54 AM

From time to time I had a tv dinner and I ate them on a new kind of collapsible metal table/stand made just for this kind of dinner. My dad sold them so we had them. I liked the chicken tv dinners best of all and the vegetables were no worse then the veggies my mother made.