The Cat Who ... Cookbook: Chocolate Whoppers 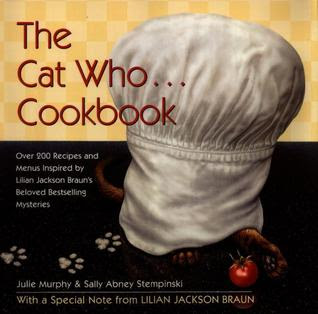 Today I chose another Chocolate Recipe from my "Tie-in" Cookbook collection. This one is from The Cat Who ...  Cookbook: Delicious Meals and Menus Inspired by Lilian Jackson Braun by Julie Murphy and Sally Abney Stempinski (2000).

'The Cat Who ...  series' of mysteries was created by Lilian Jackson Braun starting in 1966 with The Cat Who Could Read Backwards. Two more followed in 1967 and 1968, but it was 18 years before the next book was published in the series. But after that, Ms Braun wrote another 27 novels. All and all, she wrote 29 "Cat Who.." books.

The main characters in the books are James Mackintosh Qwilleran and his Siamese cats Koko and Yum-Yum. These books are what I would call 'palette cleansers': light reading in the world of mystery fiction. However they include three things I enjoy: Good Food, Siamese Cats, and a Mystery.

The recipe I chose for today's Tie-in Cookbook post is for Vonda's Chocolate Whoppers. The Chocolate Whoppers appear in The Cat Who Moved a Mountain. These are fabulous cookies with chocolate and walnuts chunks... and, yes, 'they're a trifle excessive...', as Vonda says. 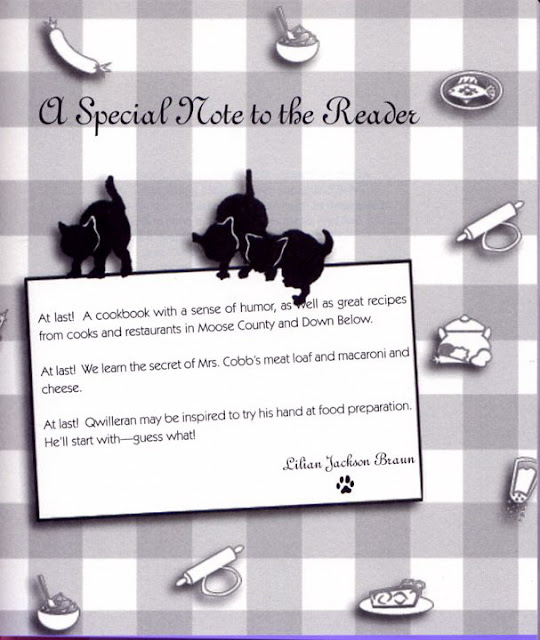 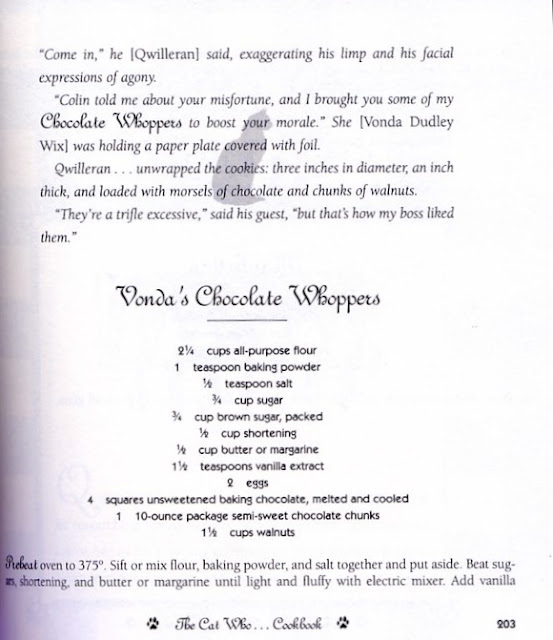 Posted by Janet Rudolph at 6:00 PM

I can't tell you how much I loved seeing this post. I am a die hard far of the late Miss Braun's and as I would ourchase all of her books, hardbound of course , my husband would laugh a bit at me as I would read out loud to all of my cats so they could share the adventures of Koko and Yum Yum. If you don't mind I am going to post this to my blog for a piece about it.

I have this cookbook, but have yet to make a recipe. How could I have missed seeing Chocolate Whoppers? Heading to the bookshelf now.

Oh Janet! What a wonderful article to have as the headlines in todays edition of The Edible Celebrations Daily!!!