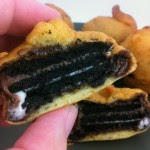 What could be more awesome than Chocolate Covered Deep Fried Triple Double Oreos? I think Bill Crider sent me to Nick's DudeFoods.com originally. I have to think so! I'm certainly enamored with the whole fried food thing at county fairs, but Nick takes it even further. First he takes Oreos, but not just any Oreos, the new Triple Double Oreos, and dips them in Dark Chocolate. And, if that's not enough, he then he fries them! Not for the faint of heart! It will clog your arteries, yes, but imagine the pure joy of eating one of these!

In case you missed it Nabisco recently launched a new type of Oreo cookie which they’ve dubbed the Triple Double Oreo. Each of these delicious new treats combines three wafers with a layer of vanilla creme and a layer of chocolate creme. In a way they’re sort of like the Big Mac of cookies.

The Triple Double Oreos are pretty good on their own straight out of the package, but you can read all about them on plenty of other websites. With this blog post I wanted to give you guys something a little bit different by taking these new cookies to the next level.

Now, Oreos have been covered in chocolate and Oreos have been deep fried, but as far as I’m aware no one has done both, let alone done it to the new Triple Double Oreos. Plus, as you can probably tell by now I’ll use any excuse at all to try out my new deep fryer.

The next day I pulled the chocolate covered Triple Double Oreos out of my fridge, dunked them in a nice batter that I whipped up and started tossing them in my deep fryer. They sort of puffed out into little balls as they were deep frying, so they ended up almost like doughnuts. The deep fryer also softened up the Oreo cookies and melted their chocolate covering a little bit, which made biting into them almost feel like I was eating a freshly baked cookie that just came straight out of the oven.

I’ll have to admit that prior to trying these I was a little worried that covering them in chocolate AND deep frying them might be overdoing it a little bit, but they turned out amazing. If I don’t see chocolate covered deep fried Triple Double Oreos being sold at state fairs all across the country next summer I’m seriously going to be disappointed. 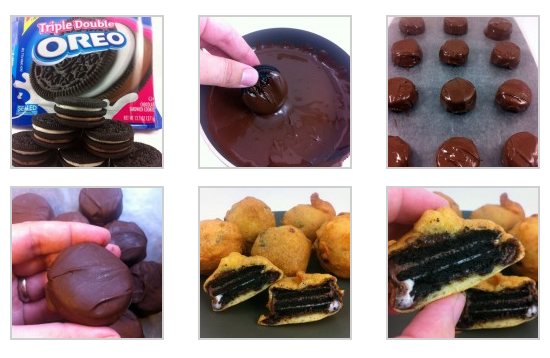 Photos: Dudefoods.com
Posted by Janet Rudolph at 7:34 AM

Like bubble gum, deep fried Oreos sort of lodge themselves in your stomach and never digest. Why must they be so tasty?

Wow. That is a deadly delicious treat!