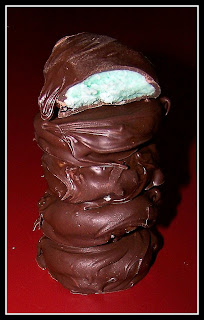 Today I welcome back  Pattie Tierney, as a guest Holiday blogger. Pattie has a passion for family, travel, dining, photography, gardening, making mystery and literary jewelry, and loves all things mysterious! You have to check out her blog Olla-Podrida for recipes, fabulous food photography and so much more. As a cookbook collector, I can't wait to get my copy of Pattie's Murderously Good Morsels, Recipes So Good It's Criminal!  Ordered it on Etsy.

It's no surprise that Pattie has a fondness for Peppermint Patties!  These are fabulous for the holidays -- or any time.

I was intrigued by this recipe from the moment I laid eyes on it while mindlessly flipping through an issue of Saveur Magazine. I like the York Peppermint Patties (Boy, do I!), but had no real clue as to how they were made, so in order to discover this I had to try making them myself. In addition to being a bit challenged in the candy-making area, I have no fondant making experience, so didn't quite know what to expect, but I blindly soldiered on!

I waited until the house was empty before beginning, as I tend to do when experimenting in order to avoid the rather amused and pithy remarks that often come from the mouths of my husband and son. As I'd allowed an entire evening to make these I was quite surprised that it took relatively little time. I followed the directions to the letter and poured the hot mixture onto the marble slabs. What a pile of glop! Good tasting, minty-fresh glop, but glop nonetheless. How on earth, I asked myself (Yes, I often talk to myself while cooking.), could this turn into anything other than goo (one step up from glop)? But I continued on, sliding it back and forth on the slabs with the only two heat-proof spatulas I had in the house -- pancake turners -- that I was holding tightly at the end. Absolutely NOTHING changed for quite some time, all the while I was thinking of various methods of disposal that would neither point a finger at me or what I'd been doing. The peppermint aroma was delightful, but strong, and a young and clever nose could sniff out my failure if it ended up in someplace as obvious as the kitchen garbage. But then, a miracle occurred, dough was forming! Excitedly I continued by gathering the mixture into a ball and kneading the it. It was very oily from the butter and I thought, once again, that I'd failed, and then all of a sudden I was there. Fondant! It was like magic! One minute I had goo, the next minute fondant! And such a firm fondant that I had to quickly reach for the spray bottle to keep it moist. It was fascinating to see what I'd perceived as a failed mess turn into peppermint patties. In fact, once this process began I really needed help because it was drying out faster than I could turn it into patties. It was supposed to make 36, but I ended up with 20 rather large ones, partially due to the speed at which the fondant was hardening and my enormous zeal to get them formed and shaped before the mixture dried beyond use.

Once the patties were formed, melting the chocolate and dipping them was a breeze. The fondant is sweet, rich, and pepperminty, so certainly you wouldn't want to indulge in more than one, but they are very good, and your family and friends will be dazzled by your skills. I put one atop a small doily at each place setting for a holiday dinner party one evening and they were quite the topic of conversation. Can you say, "Proud?"

If you're the intrepid (and by this I mean foolish) cook that I am, here's the recipe. Give it a try and report back. I'd love to know your experience.

PEPPERMINT PATTIES
The recipe for this fondant-centered candy is based on one in the Candy Cookbook by Mildred Brand (Ideals, 1979).

1. Stir together sugar, cream, milk, butter, and cream of tartar in a medium pot. Bring to a boil, without stirring; reduce heat to medium. Attach a candy thermometer to inside edge of pot; cook, without stirring, until it registers 236? (the soft-ball stage), 12?14 minutes.

2. Pour sugar mixture onto a marble slab. Using 2 heatproof spatulas, scrape mixture back and forth to make a fondant, moving it across the marble quickly until it becomes thick and just cool enough to touch, 3?4 minutes. Toward the end, completely work in the oil and coloring.

3. Gather fondant into a ball; knead until it resembles smooth dough, 3?4 minutes. (If it becomes powdery, work in a few drops of water.) Shape fondant into thirty-six 1 1 2"-wide disks, each about 1 3" thick. (Keep unshaped fondant covered while you work.)

4. Working with one fondant disk at a time, dip them into chocolate using a fork; let excess drip off. Transfer to a wax paper?lined sheet pan. Let set in a cool spot. Serve immediately or store in an airtight container in a cool spot for up to a week.

This article was first published in Saveur in Issue #107

Posted by Janet Rudolph at 7:01 AM

oh my. What a wonderful recipe! It does sound a little scary for someone like me who has no experience in candy making. But Janet - I think you've talked me into trying this. Pattie - you are amazing!

Kaye, I'm more a cook, than baker or candy maker, so this was as daunting for me as it probably seems to you. I do a lot of things just for the experience so(as I mentioned ) I wait until I'm alone! Plus who needs a husband standing in the way telling you what you're doing wrong? ;-) Try these! If they turn out well think how impressed your friends will be! (I can always make you a pin with a picture of the peppermint patties on them and that reads: Yes, I made these!)

These sound delicious, Pattie. I make dark chocolate Buckeyes and Penuche fudge for Christmas gifts--they would be a great addition.

What if my kitchen is marble-challenged? And can they be refrigerated?

Laura, I'm guessing a really clean countertop would work as well as a marble slab, in which case, I think I'd opt for moving the dough back and forth with something that is not metal to avoid scratching. There is no need to refrigerate these unless you really want to. I stored mine in a tin and they lasted for a couple of weeks just fine.