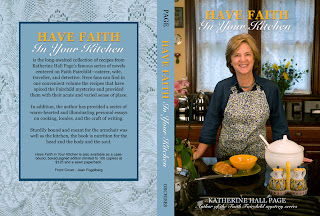 Today I welcome mystery and cookbook author Katherine Hall Page--and yes, there will be Chocolate. This is a cross-over post. My worlds collide: Chocolate and Crime Fiction!

Katherine Hall Page's The Body in the Gazebo (Wm. Morrow) 19th in her award winning series will be out in April. The Body in the Sleigh (Avon), a holiday book, is now out in paperback and her short story, “The Proof Is Always in the Pudding” appears in the current issue of The Strand magazine. Have Faith in Your Kitchen, Katherine Hall Page's collection of recipes is now available.

A Tale of How Two Old Friends Came to Cook a Book
And Yes, There Will Be Chocolate

Few writers, perhaps none, can say they met their publishers at summer camp if not on the volleyball court then near it. Roger Lathbury, who started Orchises Press in 1983, and I were probably talking about books instead of spiking a ball. It was the early Sixties and we were at Rowe Camp, “Vision in the Berkshires”, a Unitarian Universalist camp for teens. There were a lot of longhaired guitar players strumming while we belted out “Michael, Row the Boat Ashore” and “If I Had a Hammer”. Campers toted around Hesse’s Siddhartha and Gibran’s The Prophet as talismans. Roger, however, was reading Fitzgerald, Auden, Sinclair Lewis, and Lewis Carroll. When we returned to our respective homes in northern New Jersey, he sent me a copy of the Jabberwocky translated into Latin. We were soul mates.

One memorable Saturday I went with him to Irving Penn’s studio in Manhattan. Roger collected photographs of his favorite authors taken by specific artists. Showing his trademark inventiveness even at this tender age, Roger funded his pursuit with a rubber address stamp business, the stamps made by him and shipped from his home. The object of desire that day was Penn’s famous portrait of Colette. Youthful ignorance can be bliss. We simply knocked on the studio door, which was opened by Penn himself. Wonderfully generous with his time, he pulled out the Colette (which Roger did purchase at a later time) and showed us a number of other extraordinary photographs. There may have been a cup of tea, as well.

I returned to the camp for several more summers. Roger didn’t, but we kept in touch, the thread snapping only during college in the way it does.

Three years ago I heard from someone that Roger was very much alive and well, a professor of English at George Mason University teaching, among other offerings, a highly popular graduate level course in nonsense. His Orchises Press in Alexandria published original poetry, reprints, and whatever took his fancy. I immediately Googled him and found the description he’d written for the site JacketFlap: “Kindly spry, youthful, ever blithe, yet (isn't it sad?) lonely, Roger Lathbury is known on four continents as ‘the man for whom spam was invented.’ The other three continents refuse to know him at all.” And this from the George Mason English Department listing: “Lathbury is a thoroughly delightful conversationalist; his imitations of Hapsburg rulers and wind chimes are renowned throughout Virginia. He does card tricks, can yodel in six non-European languages, and has built a collection of silica gel packages that is the envy of several backwater museums.” So often in life one’s memories of an individual prove a disappointment. I breathed a great sigh of relief—and emailed him immediately! Like a good claret, Roger had aged beautifully The following spring we met for coffee when I was in town for Malice Domestic and simply picked up where we had left off over 40 years earlier, talking long into the afternoon, much of it about what we had been reading in the interim. I confessed my desire to publish the recipes from my mystery series featuring caterer Faith Sibley Fairchild —Sibley incidentally was the name of one of Rowe Camp’s extremely rustic buildings—and Roger said, “I’ll do it.” Just like that. No nonsense at all.

I do not recall any of Roger’s teenaged culinary predilections. On those trips to Manhattan we probably ate at the Automat or Chock Full of Nuts and Rowe Camp ran mostly to large vats of tuna noodle type casseroles. It was a pleasant surprise to discover that he and I now share an interest in gastronomy, as well as the belief that food and crime are a natural pairing. The cookbook’s epigraph is “Le mauvais gout mène au crime”—“ Bad taste leads to crime.” (Baron Adolphe De Mareste (1784-1867). This also serves as a motto for the entire Faith Fairchild series.

When I started writing the first book, The Body in the Belfry (1990), my husband was on sabbatical and we were living in Lyon, France. Each day, I’d shop in an open air market that stretched for blocks along the Quai St. Antoine, and watch as Paul Bocuse selected his ingredients for that evening’s three star meals before following in his footsteps to select the ingredients for my more humble attempts. Back at the apartment, after putting the food away, I wrote. I liked mysteries with food in them—Rex Stout, Dorothy Sayers, Nan and Ivan, Virginia Rich—but I think Faith Fairchild was a product not just of my imagination, but the sights and smells of all that fabulous food in Lyon. (The wonderfully fresh baguettes never made it up my long flights of stairs intact-the heel was always missing by the time I opened my door).

Have Faith in Your Kitchen had been a work in progress since I first started putting recipes at the end of the books, starting with The Body in the Cast (1993). All the recipes are original, either created by me or the individual credited. The dishes are straightforward-anyone can make them-and require no expensive or exotic ingredients. In some cases, I’ve also suggested ways they can be modified to make them more heart-wise. The appendix lists the recipes by each book; some play a more prominent role in the plots than others. As I told Roger all this over coffee and croissants that day in Virginia, the book seemed to take shape right before my eyes. I’d include the Author’s Notes from the books—topics ranging from reading cookbooks solely for pleasure to funeral baked meats and other customs. The book would need an introduction. Illustrations?

Thus began the most enjoyable publishing experience of my life—a year of discussion of fonts, paper quality, and yes, illustrations, from a variety of sources: nineteenth century cookbooks, pen-and-ink drawings done by a friend. After lunch with Roger’s delightful family, I chose a burgundy Roxite Grade B cloth for the cover with a maroon headband (that little bit at the top of a sewn binding). We were doing two editions, a sewn paperback that could get messy in the kitchen and 100 signed, with a fountain pen to be precise, numbered casebound copies, both editions for “Those devoted to the cooking of mystery and the mysteries of cooking.” Roger showed me what J. D. Salinger had selected for “Hapworth 16, 1924” and, as it was after Salinger’s death, Roger felt free to relate the whole publishing adventure that sadly went awry (see Lathbury’s very moving article on it in the April 4, 2010 issue of New York Magazine). Jean Fogelberg took the author photo and did the marvelous cover design. Receiving author copies is always thrilling and a bit mystifying—“How did I do this?” This time it was less complicated, a huge thrill accompanied by the knowledge that it had all come about because of my friend Roger.

And now for the chocolate. Early on I knew that each book had to have a killer chocolate recipe in some form, so there have been cakes, cookies, bread puddings, and many references in the text to Faith Fairchild’s chocolate cravings. Here are what I consider the cream of the recipe crop: Glad’s Brownies and Chocolate Bread Pudding, both of which are the fan favorites, as well! Enjoy!

Preheat the oven to 350°. Grease and lightly flour a 13”x 9” pan. Melt the chocolate squares together with the butter. Cool it slightly and beat in the sugar, eggs, and vanilla. Stir in the flour. Mix well, then add the cherries, walnuts, and chocolate chunks or chips. Put the batter in the pan and bake for about 35 minutes. Be careful not to over bake. Cool in the pan and serve. Makes a very generous1 1/2 dozen.

You may vary this recipe by substituting dried cranberries, golden or dark raisins for the cherries and pecans for the walnuts. Attributed in the book to Faith as a child, it is actually the creation of the author’s dear friend, Gladys Boalt of Stormville, New York.

Mix the eggs, milk, half and half, sugar, vanilla, and salt together. Faith likes to pulse this in a blender, which makes it easy to pour over the bread cubes.

Put the bread cubes in a large mixing bowl and pour the egg mixture over them. Use the palm of your hand to gently push the bread into the liquid to make sure it absorbs evenly. Cover with plastic wrap and refrigerate for at least 30 minutes.

Mix the cherries and chocolate chips together in a small bowl.

Put a layer of the bread mixture in the pan, sprinkle the cherry/chip mixture over it, and cover with the remaining bread mixture. Again, use the palm of your hand to press down, so the ingredients are evenly distributed.

This is a very rich dessert and this recipe will serve 12 easily.

Neither Faith nor I have ever met a bread pudding we didn’t like. It’s comfort food. Many bakeries make chocolate bread. When Pigs Fly, the bakery company mentioned in the text is based in Wells, Maine, but their breads—including the chocolate bread—are sold at many Whole Foods and other markets. They also sell the bread—you bake it in your own kitchen for the last 30 minutes—online at www.sendbread.com. They also sell a kit to make the chocolate bread.
Posted by Janet Rudolph at 7:00 AM

Katherine:
So happy to see your post today on Janet's blog. I've read all of your books. My two favorites are the 'Body in the Vestibule' and the one set in Norway. You are a mystery fiction treasure!
Bobbi Mumm

These recipes sound yummy. Love the cover of Have Faith in Your Kitchen.

thank you for sharing,