Today is National S'mores Day. This food holiday is perfect for summer. I've posted all kinds of S'mores recipes in the past few years, but today I'd like to give a little history.

If you're not familiar with s'mores, they are made by sandwiching a toasted marshmallow and a piece of chocolate in between two graham crackers.

The name S'mores (alternatively Smores) comes from the two words "some more," because people always want s'more. This very American treat was developed by campers (or more specifically Girl Scouts) in the early part of the 20th century, making use of the newly mass-produced marshmallow. Marshmallows were easy to transport, as were candy bars and graham crackers, and the marshmallows could be toasted  over a fire to make a delicious treat in a situation where other types of sweets would have been difficult to come by.

The true origin of the snack is unknown, as camping recipes were passed from family to family - often over the campfire itself. The very first printed record of the recipe was in 1927 in a girl scout manual "Tramping and Trailing with the Girl Scouts".  Read more HERE. 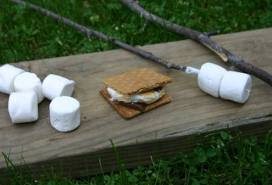 Some More:
8 sticks (for toasting the marshmallows)
16 graham crackers
8 bars plain chocolate (any of the good plain brands, broken in two)
16 marshmallows


Toast two marshmallows over the coals to a crisp gooey state and then put them inside a graham cracker and chocolate bar sandwich. The heat of the marshmallow between the halves of chocolate bar will melt the chocolate a bit. Though it tastes like "some more" one is really enough. 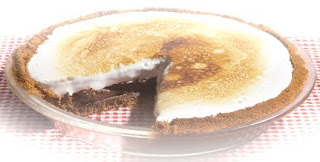 1. Make the crust. Crumble graham crackers into the work bowl of a food processor and process until finely ground. Alternatively, you can put them in a bag and whack them with a rolling pin until finely crushed. Pour melted butter into crumbs and mix (hands are best for this) until the butter is fully incorporated and the texture is that of wet sand. Butter or oil a 9-inch pie pan and firmly press the graham cracker crumbs against the sides, then against the bottom of the pan (the underside of a measuring cup works well for smoothing the bottom crust). Chill for at least 30 minutes to avoid crumbling when serving.

2. While the crust chills, preheat the oven to 350 degrees and prepare the chocolate filling. Put the chocolate in a large mixing bowl. Heat the cream in a saucepan until scalded — do not boil. Pour the cream over the chocolate and allow to stand for 1 minute. Whisk the cream and chocolate together until glossy and smooth. Add a pinch of salt, then crack the egg into the chocolate mixture and whisk to fully incorporate. Pour into chilled crust and bake for 25 minutes, or until the filling is set but still slightly wobbly in the center. Remove from the oven and cool completely.

3. Prepare the marshmallow topping. Pour 1/4 cup water into the bowl of a stand mixer and sprinkle the gelatin on top. In a large saucepan over medium-high heat, stir together the remaining 1/4 cup of water, sugar and corn syrup just until sugar is dissolved. Heat until a candy thermometer reads 260 degrees, or hard-ball stage. Remove from heat, turn stand mixer to medium speed to begin beating the bloomed gelatin, and slowly pour in sugar syrup, scraping any remaining syrup from the pan with a heat-proof spatula. Begin increasing the speed of the mixer, avoiding any splashing, and beat until the mixture is white, fluffy and tripled in volume. Add vanilla and beat for a few moments more. Pour the mixture onto the cooled chocolate layer, gently spreading it to the edges of the crust with a spatula. Refrigerate, uncovered, 30 to 60 minutes.

4. The last step: brûlée the marshmallow. A torch is best for this (a propane torch from the hardware store or a butane crème brûlée torch). If using a torch, clear the area of any flammable items, ignite the torch, and slowly wave the flame over the surface of the marshmallow until you achieve the desired level of toastiness. If you do not have a torch, use the broiler of your oven. Preheat the broiler, cover the edges of the pie crust with foil or pie shields, place the pie on a baking sheet and broil — watching carefully to prevent burning — for 2 to 3 minutes, rotating as necessary.

5. To slice the pie, it helps to dip your knife in hot water, then dry it with a towel. The heat facilitates easy slicing through the marshmallow layer. Serves 8.

Instructions:
Preheat oven to 375°F. In large mixing bowl, cream butter and sugars.
Beat in egg, milk, and vanilla. In medium bowl, combine flour, graham cracker crumbs, baking soda, salt, and cinnamon.
Gradually add dry ingredients to creamed mixture.
Stir in chocolate chips.
Drop by teaspoonfuls 2 inches apart onto ungreased baking sheets.
Bake for 8 to 10 minutes or until golden brown.
Remove to wire racks to cool.
Place four cookies bottom side up on a microwave-safe plate and top each with a marshmallow. Microwave, uncovered, on high for 16 to 20 seconds or until marshmallows begin to puff (do not overcook).
Top each with another cookie. Repeat until all the cookies are formed into sandwiches.

Here's a round-up of some of the recipes I've posted previously.