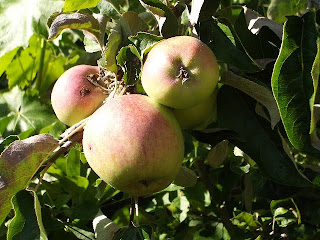 Recently Jonathan Kauffman blogged in the SF Weekly about the Slow Food's Gravenstein Apple Promotion: Make a Pie, Save a Tree.  Frank used to own an apple orchard in Sebastopol (Gravenstein, of course), and every time we drive through Western Sonoma County, he laments the loss of Gravenstein Apple Orchards to vineyards.

There really are no apples quite like Gravensteins. If you don't live in Northern California, you may not have had Gravensteins. They don't travel all that well. But if you do live here, now's the time to buy Gravensteins and preserve the heirloom/heritage varieties of foods that are disappearing from our markets. This year The Slow Food's Russian River chapter is launching a Gravenstein promotion to pay local farmers enough for their apples so they can afford to keep their trees.

The challenges faced by Gravensteins:
1) commercial viability --they're short stemmed so many fall to the ground and are used for applesauce, vinegar and juice. And, as I mentioned, they don't ship well.
2) no surprise here but apple trees aren't as profitable as grapevines.

So Frank and I are doing our bit. We've planted 9 Gravenstein apple trees in our yard in Berkeley. They're Sonoma county trees (planted in Alameda County), and they're doing well. This is our 7th harvest (lucky #7) and the trees are filled with apples. Yes, a lot fall to the ground, but Topper, our golden retriever, loves Gravensteins as much as we do, and he makes short shrift of the ground apples. In the past he used to shake the small trees and make the apples drop, but this year the trees are big and full, and he has plenty to occupy his time and fill his stomach.

I tweaked this recipe a bit. I posted it on Apple Pie Day, but I like more chocolate and using Gravensteins which are only available for a short time. It makes a difference. My apples are small, so I use more apples in the recipe.

Spread the word about Gravenstein Apples! Make a Pie, Save a Tree!!!
Posted by Janet Rudolph at 7:09 AM

An apple a day puts a smile on your face and it keeps the local apple growers a=happy if it is a Grav!

Crunchy and delicious, the Gravenstein
is my apple of choice. Try one and you will see how good it is.

Sadly, I can't get Gravensteins where I live. I do have two apple trees in my back yard, though, along with three pear trees. My dogs love fruit, and my youngest will leap into the branches to get whatever she can if there's nothing on the ground.

Do you have a recommendation of a substitute apple if Gravs aren't available?

Any tart apple will do. You can use your judgment on how many apples you'll need..depends on their size. I just wanted to get a plug in for Heirloom apples which is what Gravensteins are becoming. Northern California is all about grapes, and the vineyards are taking over.