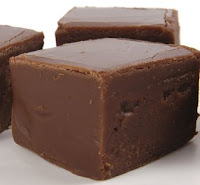 Today is National Fudge Day. I love fudge, and I've blogged lots of fudge recipes over the past year or so. I thought I'd do a round-up of some of those fudge recipes and add a new one.

I'm from Philly, and I grew up with Philadelphia Cream Cheese. Here's a recipe for Philly Fudge: This recipe, an adaptation of the famous uncooked fudge recipe developed by Philadelphia Brand Cream Cheese, became popular right after World War II. It's pretty foolproof.

1. Butter an 8 inch baking pan well; set aside.
2. Melt chocolate in double boiler over hot, not boiling water.
3. Mix cream cheese and milk (or cream), beating on high speed until smooth. Add powdered sugar, 1/2 cup at a time, and beat at low speed until creamy.
4. Blend in melted chocolate, vanilla, and salt. Beat until smooth. Stir in pecans or walnuts, but not both.
5. Press mixture into pan, cover with plastic wrap and chill overnight or until firm. Cut into 1 1/4-inch squares.
Posted by Janet Rudolph at 5:41 AM

Oh, fudge! Good stuff to eat and such a useful word for cursing in polite company. :)

I don't like candy, so why this two day craving for fudge? So desperate, I thought of buying a can of chocolate cake frosting. (blush)

Only you guys could invent a National Fudge Day - I love it!

Vannie, clearly you were getting ready for the holiday. Chocolate frosting works in a pinch. :-)

Cleo, yes, the word has a double meaning..both excellent.

Nicisme, I didn't invent Nat'l Fudge Day, but I sure know how to celebrate it!

wow.....that fudge looks deadly...I want some!!!!! I'm just across the bridge can you send me some on the high speed line!!

Probably faster and safer to make it yourself. :-) Easier, too!

Check out these great recipes:

Very superior blog tells about the Chocolate News, Reviews and various Recipes. I like it so much.