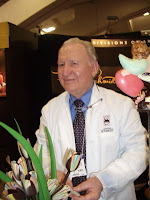 Not wanting to ruin the holiday for so many Joseph Schmidt aficionados, I haven't mentioned the demise of the chocolate line that was announced around Valentine's Day. This Easter was the last for Joseph Schmidt which opened shop in 1983. The Hershey Company bought Joseph Schmidt Confections in 2005 and continued the brand. Now Hershey says they will be discontinuing the brand and closing its two Bay Area stores in San Francisco and San Jose by June 30. To read more, go here. Hershey says that Joseph Schmidt, the chocolatier, will remain a Hershey employee, but workers at the Castro and San Jose stores and the South of Market factory will be laid off. First Scharffen Berger, now Schmidt. A sad time for Bay Area chocolate.

The photo of Joseph Schmidt was taken by me at the Fancy Food Show in San Francisco in January.
Posted by Janet Rudolph at 6:59 AM

So sorry to hear that. I really love their truffles, but I noticed the store in the Philadelphia area that carried them had less of a selection recently.