My friend Jeff sent me this photo (L) of Milk Chocolate Covered bacon from the This is Why You're Fat Blog. CCB is definitely one of the Seven Deadly Sins. On going directly to the source, I found this second treat, Chocolate Covered Apple Smoked Bacon. This uses dark chocolate. It's that sweet-salty thing that is so appealing. I found a recipe 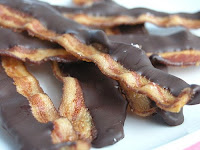 at Kevin's Tech Ramblings that includes the history of CCB.

Needless to say, the recipes and chocolate on today's blog do not observe the rules of kashrut.

O.K. maybe some of you just might not want to see exactly what you're eating. The Chocolatier Vosges offers Mo's Bacon Bar. Copy reads, "Breathe…engage your five senses, close your eyes and inhale deeply. Be in the present moment, notice the color of the chocolate, the glossy shine. Rub your thumb over the chocolate bar to release the aromas of smoked applewood bacon flirting with deep milk chocolate. Snap off just a tiny piece and place it in your mouth, let the lust of salt and sweet coat your tongue."
Mo's Bacon Bar: applewood smoked bacon + Alder wood smoked salt + deep milk chocolate, 41% cacao 3oz.

My search expanded as I wondered what other sweet/salty chocolate bacon treats were out there. A Good Appetite takes this treat to a new level with Dark Chocolate & Bacon Cupcakes. Well if you can put black beans in brownies, why not bacon in cupcakes? This recipe uses Hershey's Special Dark Cocoa, so now we're moving in the right direction--dark chocolate, that is. One warning in the recipe says not to skimp on the bacon, so that there is a nice chunk of bacon in each bite.

It's said that bacon covered chocolate originated at Marini's in Santa Cruz. Not sure, but I'd love to hear from others. Yumsugar has a fabulous recipe to make chocolate covered bacon at home. I think I prefer this recipe to the one above.

Of course, I needed to see if there were Bacon Chocolate Chip Cookie recipes. Yes, The Culinary Sherpas have a recipe. One of the comments on their Blog suggested Nutella and bacon crepes as a bacon/chocolate treat. Now that doesn't sound weird at all.

To update the 'special' Brownie recipes from the other day, and I knew there would be one, Bacon Brownies. This recipe by Mike Kirsch uses the Betty Crocker Hershey's Turtle brownie mix, but if y 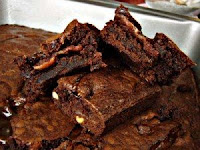 ou're a purist, you'll figure out you're own recipe from scratch.

This might be April 1, but this is not an April Fool's joke!
Posted by Janet Rudolph at 12:39 PM

I have almost licked the screen. Bacon and chocolate the 2 perfect foods.

The Dissident Chef had an all-bacon dinner last Friday. Chocolate-chip-bacon-crumb cookies were the last of ten or so courses. I suspect he also used bacon grease for his pans or in the batter too. Delish.

Wish I had known about that. Sounds fabulous!!!!

Wow. When I saw bacon chocolate I thought it might be the awful chocolate bar with imitation bacon bits in it. This looks actually good!

What can I say.. that looks.. beautiful :) I really want to try that bacon bar too.

"Mo's Bacon Bar" is an excellent candy bar that combines bacon & chocolate in a well-balanced mix of salty & sweet. It's intensely flavored, so you can savor small bites for a long time. Highly recommended.

Per the earlier post on Dissident Chef's "Bacon Heart Attack Dinner," I can say that his bacon chocolate chip cookies were among the best cookies I've ever eaten.

I'm planning to try this tomorrow. I think I'll try to shoot it, but I don't think it will be as pretty as your picture!