"We spent three years putting this together," said Rossetto, the silver-maned CEO of TCHO, who started Wired magazine in 1992 and sold it six years later for a reported $30 million. "Now, for me, it's like the first issue is about to hit the stands. We're in a magical moment."

As TCHO chocolates begin to reach the market, the 30-person company located at Pier 17 becomes the only maker from bean to bar of chocolate in San Francisco.

Tcho doesn't use percentage cacao or varietal as descriptors. Instead, its chocolates are packaged based on flavors: chocolaty, citrus, fruity, floral, earthy, nutty. Pretty unique, and I guess I'll need to try them all to make a judgement. The flavor comes from the bean's terroir, but another part is in how Child brings out the flavors in the roasting and fermenting process.

High tech is an important part of the Tcho process, no big surprise, but so unique. Soon Childs will be able to monitor fermentaria across the globe from his iPhone. 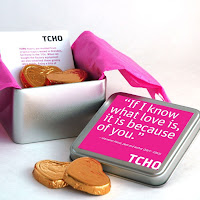 Tcho was at the top of the Chocolate Picks in Drink of the Week's Valentine's Day list.

The TCHO factory in San Francisco will open to the public for tours and educational events in the fall. The chocolates are sold at TCHO's store at Pier 17 at Embarcadero and Green and at www.TCHO.com, also available at select specialty stores in San Francisco, Berkeley and San Mateo.

Glad to see there will be chocolate tours in the Bay Area, especially after Scharffen Berger's Berkeley closing.

TeamBuilding Unlimited, a division of Murder on the Menu, is now offering a San Francisco Chocolate Scavenger Quest (groups only).

Posted by Janet Rudolph at 7:13 AM

I didn't know Scharfen's closed a store! I hope just an outlet closed. I order their giant bags of cocoa for cooking. It's a wonderful cocoa and probably my favorite baking cocoa.

Hershey's bought Scharfen Berger a few years ago, but they continued the name brand under their Artisan chocolate. There is another location where the chocolate is made. Hershey's will continue to make Scharffen Berger chocolate, but the original factory in Berkeley has shut its doors. I think you'll be able to order the baking cocoa, my favorite, too. It's very sad since the Scharffen Berger factory was so small and approachable-full of history (short history, but history). A great place to take out-of-towners.

I read further down on your blog and gathered that Hersey's had bought them. I didn't know that...! I use a different cocoa for hot drinks (Valrhona or Ghiradelli). They are both Most Excellent, but are dutched. I know you can use dutched in cooking, but I don't do it often and always have to look up what I'm supposed to substitute (baking power/baking soda).

Have you tried roasted chocolate nibs??? Ooooh, you should if you haven't. They are wonderful. Can be used in cooking (like a chocolate chip). I ordered a bundle of chocolate covered nibs this year for Christmas. They are dynamite!!!

Frank Price does Chocolate Tastings for my company TeamBuilding Unlimited/Murder on the Menu (hence the dying for chocolate), and he always passes around nibs (chocolate-less).