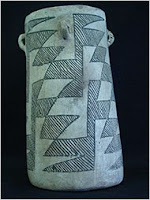 For years Patricia Crown puzzled over the cylindrical clay jars found in the ruins at Chaco Canyon, the great complex of multistory masonry dwellings set amid the arid mesas of northwestern New Mexico. They were utterly unlike other pots and pitchers she had seen.

Some scholars believed that Chaco’s inhabitants, ancestors of the modern Pueblo people of the Southwest, had stretched skins across the cylinders and used them for drums, while others thought they held sacred objects.

But the answer is simpler, though no less intriguing, Ms. Crown asserts in a paper published Tuesday in The Proceedings of the National Academy of Sciences: the jars were used for drinking liquid chocolate. Her findings offer the first proof of chocolate use in North America north of the Mexican border. Continue reading.

Tests of jars found in the ruins of Chaco Canyon in New Mexico confirmed the presence of theobromine, a cacao marker.

***
O.K. this is surprising because it's so much earlier, but there's so much more for us to discover about chocolate. So we now need to drop the date by 500 years.
***

Cacao, the staple of Valentine's Day chocolates and hot drinks by a cozy winter fire, made it to the American Southwest by AD 1000, centuries earlier than researchers had believed. Scientists said they had found traces of theobromine, the chemical that serves as a distinct marker for cacao, on pottery shards found in a multistory pueblo in northwestern New Mexico.

Previous studies had not placed cacao in what is now the United States until after the Spanish conquest of South America in the 15th century.

The nearest source for the cacao, which was made into a bitter beverage used in religious and other rituals, was more than 1,200 miles to the south in Mexico. Read Continue Reading L.A. Times.

Posted by Janet Rudolph at 5:42 AM