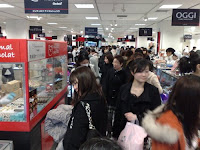 Valentine's Day is all about chocolate, and I blogged about it. However, here we are a week or so later, and I want to relate a Chocolate Valentine's Day tradition in Japan.

Valentine's Day in Japan is chocolate and female driven. Women profess their love on February 14 and give either handmade or expensive branded chocolate. Men who receive the chocolate can withhold their answer for another month. On March 14, now known as White Day in Japan, men are supposed to return chocolate to these women, along with an answer of Yes or No.

However, not everyone is lucky to have a great admirer who would put so much effort into the day. So to give mercy on all the men in Japan, women have defined two kinds of chocolate gifts that they offer on Valentine's Day. The first one is called "Honmei Choco" which describes the outcome of their true love. Another is called "Giri Choco" which could be translated as Obliged or Duty chocolates. To make sure there is no confusion, duty chocolates are often inexpensive and often distributed to multiple people. Most women in Japan buy both kinds. Honmei Choco is given to husbands or boyfriends, and Giri Choco is given to colleagues and classmates.

Interesting custom. Who profits from a double Valentine's Day?

To read more and get some chocolate sale costs in Japan.

I'll be looking for a story in the Japanese papers on March 14.
Posted by Janet Rudolph at 2:14 PM