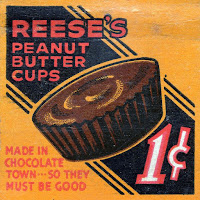 And here's a bit of history about Reese's Peanut Butter Cups from The Nibble:  Harry Burnett Reese, a former dairy employee of Milton S. Hershey, was so inspired by Mr. Hershey that he left to start his own candy business. The H.B. Reese Candy Company had some success with Johnny Bars and Lizzie Bars (caramel-like molasses and coconut candy) and also had its share of adversity.

By the mid-1920s, it was manufacturing a product made with specially-processed peanut butter and chocolate from the local Hershey Chocolate Company. Introduced simply as peanut butter cups, as its popularity grew the candy became known as Reese’s Peanut Butter Cups. Fast-forward to 1963: Reese returns to Hershey’s when The H.B. Reese Candy Company, Inc. was sold for $23.5 million to the Hershey Chocolate Company (then known as Hershey Foods Corporation).

So for today's recipe for I Love Reese's Day is a recipe for Reese's Peanut Butter Cup Cheesecake from  Peggy Lynn  (March 31, 2005) on Food.com This recipe was originally based on one from the Ruggles Grill in Houston. You will need to cook this cheesecake a bit longer than the original recipe directions (I've made the change for you in the directions). Make sure the cheesecake is cooked through. I also use fewer oreos in the crust or you'll have a lot left over. Adding the peanuts to the crust is a fabulous addition, too! I often leave off the sour cream topping, but I'm including it in the recipe below, in case you want to try! You could always add a chocolate ganache as a topping. Just a thought.

Decorating the top of the cheesecake: I'm a purist, but you can add pieces of Reese's on the top or drizzle with chocolate or sprinkle with peanuts... whatever!

Plan ahead--cheesecake needs to chill for at least 4 hours.

To Make the Crust
Combine crushed Oreo cookies and peanuts that have been ground in a food processor with the melted butter.
Pat the crust mixture onto bottom and sides of a 10-inch springform pan.

To Make the Filling
Beat cream cheese in bowl of electric mixer until smooth.
Add eggs, one at a time, beating well after each addition.
Add sugar, peanut butter and cream; mix until smooth.
Stir in vanilla, then fold in peanut butter cup pieces with a rubber spatula.
Pour filling into prepared crust.
Place springform pan into a larger baking pan.
Pour hot water into the larger pan so that the water comes 1 inch up the sides of the springform pan.
Bake at 275°F almost 2 hours (check at 1 hour 45--keep checking if not done in 2 hours), or until firm (but slightly springy--it will firm up a bit as it cools) and lightly browned.
Remove from oven and allow to cool on a wire rack for one hour.
You may run a knife along the edge of the cake to loosen it from the pan.
Refrigerate for at least 4 hours.

(Optional) For the Topping
Combine the sour cream and sugar and spread on the cheesecake.
Return the cake to the oven for 5 minutes.