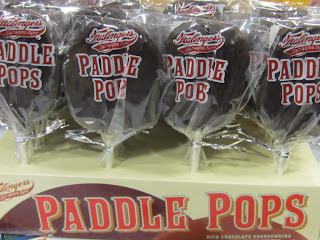 Today is National Taffy Day, and I must mention my favorite taffy: Fralinger's Molasses Paddle Pops!

I grew up in Philadelphia, and every summer we went Down the Shore to Atlantic City, Margate, or Ventnor. I'm sure you recognize these names from Monopoly. One of the big attractions for me as a kid was salt water taffy. I loved it, and I remember thinking at the time that my friend Margie had the best and most glamorous job in the world: She sold salt water taffy at Fralinger's on the Boardwalk. In retrospect, it probably was not an easy job, but all I could think of was her access to all that salt water taffy and candy!

My favorite candy at Fralinger's was the Molasses Chocolate Covered Paddle Pop. Essentially it is Fralinger's fabulous molasses salt water taffy covered in delicious dark chocolate and shaped into a Paddle Pop! These Paddle Pops now come in other flavors, but Molasses was the original. I hadn't thought of this 'retro' treat in a long time, but I saw these Fralinger's Molasses Paddle Pops at the Fancy Food Show a few years ago. Not going down the Shore this summer? These candy treats are available online.

One caveat: Hold on to your teeth.. this is like a hard taffy pull... the chocolate is easy, the taffy is challenging, but it's worth the effort. Of course you can lick it. It is a pop, after all, but then you wouldn't enjoy the chocolate with the molasses. Eating technique is up to you!

I couldn't find a recipe that replicated Molasses Paddle Pops. Let me know if you have one. Maybe sometimes, you just can't make it at home.

While the origins of Salt Water Taffy remain a mystery, one thing is for certain. No one did more to promote this popular confection than Joseph Fralinger.

A former glassblower and fish merchant, Joseph returned from Philadelphia to his Atlantic City roots in the mid 1880s. After taking a job with a bricklayer, he earned enough money to open a small concession on the Atlantic City Boardwalk from which he sold fruit, soda, and the latest summer sensation, "lemonade."

By 1884, Joseph was approached to take over a taffy stand on Applegate Pier. He agreed and began to perfect his own recipe for Salt Water Taffy, introducing his first batch of molasses taffy in 1885. Throughout the years he developed a number of new flavors, eventually offering Atlantic City's largest selection with 25.

As Fralinger's grew to six locations, he decided that Salt Water Taffy should return home with resort visitors. Using experiences from his fish merchant days, he packed one pound oyster boxes with Salt Water Taffy, making it the first "Atlantic City Souvenir." The one-pound box still remains the most popular souvenir 125+ years later. By 1899 Salt Water Taffy had become a household word across America!

Posted by Janet Rudolph at 7:37 AM

IGrew up in northeastern Pennsylvania near Scranton .In our small town of 1200 people we had a Greek woman who made wonderful candy and she made paddle pops I had never heard of them before or since but I don’t remember any taffy or molasses her paddle. pops usually were usually vanilla ice cream covered in chocolate on a stick.
I have never had such good homemade thin ribbon candy at Christmas and always wonderful peanut brittle. DelicaciesDelicacies much tastier than your Philadelphia scrapple.😂😂😂