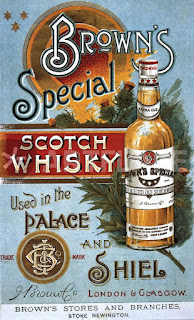 I've posted Bourbon Brownies, and I've posted recipes for St. Patrick's Day Irish Whiskey brownies, so it's only natural to make these brownies with Scotch for Butterscotch Brownie Day. Hey, there's butter in the recipe, too!

How's that for Butter "Scotch" Brownies?
Posted by Janet Rudolph at 9:26 AM