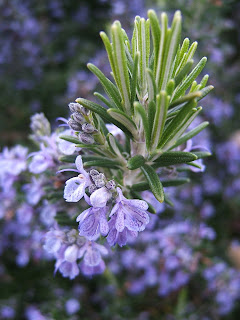 "Rosemary is for Remembrance"-- so this recipe for Rosemary Chocolate Chip Cookies is perfect for Memorial Day. I grow a lot of rosemary in my garden. I use it in baking and grilling. It's a very versatile herb. There are several varieties, and they flower, so it's also quite pretty -- and deer resistant. Rosemary is also very aromatic. And, a little goes a long way.

Directions
Preheat oven to 375° F.
Combine flour, baking soda, and salt in small bowl.
Beat butter, both sugars, and vanilla in large mixer bowl until creamy.
Add eggs, one at a time, beating well after each addition.
Gradually beat in flour mixture.
Stir in chocolate chips, chopped rosemary, and pecans.
Drop by rounded tablespoon onto un-greased cookie sheets.
Bake 9-10 minutes or until golden brown.
Cool on cookie sheets for 2 minutes; remove to wire racks to cool.
Posted by Janet Rudolph at 8:43 AM