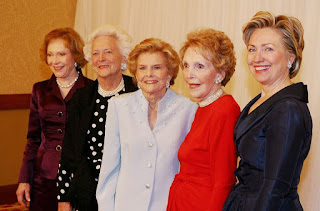 Tomorrow is Presidents' Day. It's not any 'real' president's birthday. When I was growing up we celebrated both Lincoln's Birthday and Washington's Birthday on two separate days. That also meant two days off from school, not just one. Times have changed. For this year's Presidents Day, I'm featuring recipes by the women behind the men (sadly not a man behind the woman, although there's a family recipe for the 2016 Cookie Bake-Off. See below). Here are several Chocolate Recipes from first ladies. The recipes are found in the individual Presidential Archives, as well as newspapers, magazines (Family Circle) and individual cookbooks. Make any of these great recipes and celebrate Presidents Day. 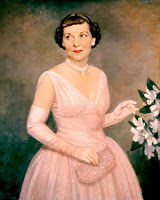 Directions
Boil sugar, salt, butter, evaporated milk together for six minutes.
Put chocolate bits and German chocolate, marshmallow cream, and nutmeats in bowl.
Pour boiling syrup over ingredients.
Beat until chocolate is all melted, then pour into pan.
Let stand a few hours before cutting.
Remember it is better the second day. Store in tin box.

Directions
Line flat 9x9″ cake pan with wax paper.
Slice angel food cake and place a layer of cake in pan. (Slices easier if frozen). Separate eggs, beat yolks.
Melt chocolate in double boiler over water.
When melted, add sugar and water. Mix well. Make sure sugar melts.
Remove from heat and stir gradually into beaten egg yolks. Beat until smooth. Cool this mixture. Add vanilla and salt. Mix well.
Beat egg whites until stiff.
Whip the cream.
Fold egg whites into chocolate mix, then the whipped cream.
Place a layer of chocolate on the angel food slices, than another layer of cake, then a layer of chocolate.
Place in refrigerator overnight.
This can be frozen and used later. Be sure to chill overnight before freezing. 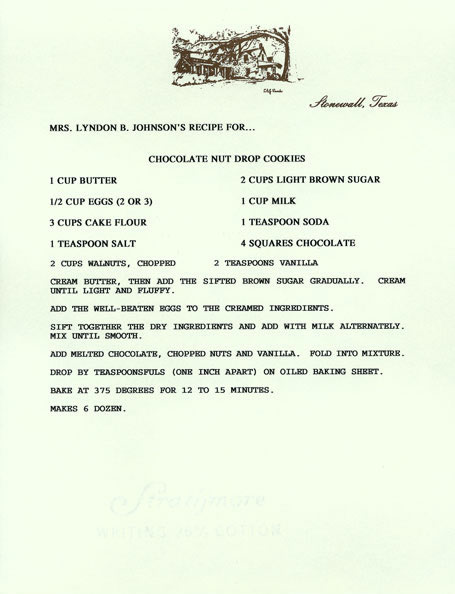 Directions
Heat oven to 375°.
Whisk together flour, baking soda, and salt in small bowl. In large bowl with electric mixer, cream butter, vegetable shortening, granulated sugar, brown sugar, and vanilla extract.
Add eggs, 1 at a time, beating well after each addition.
On low speed, beat in flour mixture. By hand, stir in white and milk chocolate chips, mint chips and walnuts.
Drop rounded tablespoons of dough onto un-greased baking sheets.
Bake at 375° for 10 to 12 minutes or until golden brown. Cool on baking sheets for 5 minutes; remove to wire racks to cool completely.

***
Starting in 1992, Family Circle Magazine has orchestrated a political bake-off during every presidential election year. It was already commonplace for presidential candidates to release family recipes during their campaign—it helps to humanize the candidates and also allows them to promote family values. But Family Circle decided to up the ante by publishing cookie recipes from the wives of each candidate and asking readers to try baking both and then vote on their favorite. The results of the bake-off have interestingly almost always predicted the winner of the presidential election, save a couple outliers.

Laura switched up her recipe during her husband’s second presidential campaign in 2004 to a similar oatmeal chocolate chunk recipe, but it’s her first Cowboy Cookie that’s become so famous. As with most things in Texas, Laura’s Cowboy Cookies are big and completely stuffed with so many mix-ins: oats, coconut, pecans, and of course, chocolate chips.

And in case you're wondering, yes, there was a 2016 Cookie Bake-Off of the Candidates's spouses. Bill Clinton was asked to contribute a recipe, and the Clinton campaign submitted the "Clinton Family's Chocolate Chip Cookies" (see above for same recipe 1992, 1996, 2016!) -- a reprise of Hillary Clinton's earlier oatmeal chocolate chip cookie. Melania Trump submitted her recipe for Star Cookies, a rolled butter cookie, enriched with a bit of sour cream and egg yolk. Nothing special, and no chocolate!  She did not win..Sadly her husband won the electoral vote, but not the popular vote ... just as this cookie shows... no one likes a plain cookie!
Posted by Janet Rudolph at 8:00 AM