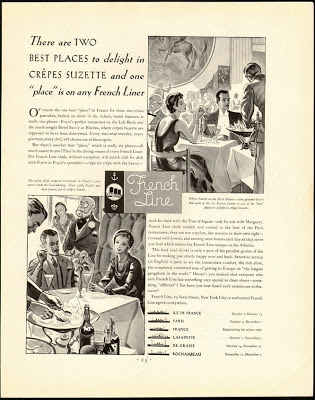 To add a chocolate element, you can always add chocolate sauce to your traditional crepes suzette, but why not make Dark Chocolate Crepes?

Probably the most famous crepe dish in the world. In a restaurant, a crepe suzette is often prepared in a chafing dish in full view of the guests. They are served hot with a sauce of sugar, orange juice, and liqueur (usually Grand Marnier). Brandy is poured over the crepes and then lit. The dish was created out of a mistake made by a fourteen year-old assistant waiter Henri Carpentier (1880-1961) in 1895 at the Maitre at Monte Carlo's Café de Paris. He was preparing a dessert for the Prince of Wales, the future King Edward VII (1841-1910) of England.

Only if you're really careful: flambé sauce: reserve two tablespoons and add three more of Cognac. Stir together and remove the pan from heat. Ignite with match and pour flaming sauce over crepes.
Posted by Janet Rudolph at 6:58 AM