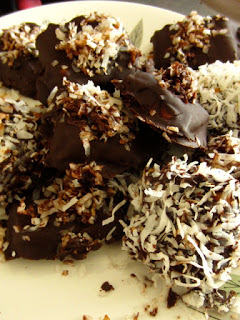 The words both come from the Italian maccarone or maccherone which is derived from ammaccare, meaning crush or beat -- referencing almond paste as the principle ingredient. Most macaroon recipes contain egg whites, almonds or nuts. Sometimes coconut--and definitely sugar! I grew up with macaroons that were mainly coconut. 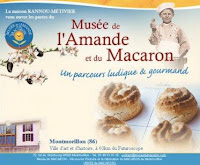 First, you should know that there is an Almond & Macaroon Museum in Montmorillon, France. This museum pays homage to the generations of craftsmen who built the reputation of Montmorillon, Cité of Macaroons.  The Museum reveals the history of the macaroon, from the culture of the almond tree (and the multiple uses of almonds), to the arrival of the macaroon in France.

SCOTTISH MACAROON BARS FROM CATRIONA MCPHERSON
And for those of you who like to drink your Chocolate Macaroons, here's a great:

Combine liquid ingredients in cocktail shaker with cracked ice and shake well.
Strain into chilled martini glass and garnish with orange twist.
Posted by Janet Rudolph at 7:45 AM