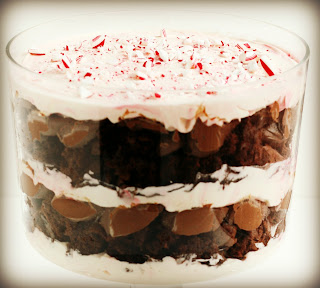 I love a good trifle, and I have posted several recipes for trifle before, but since you're  probably planning your holiday dessert, I thought a  Chocolate Peppermint Trifle would be great-- a very English Christmas dessert.  Trifle is easy and quick to make. I'm posting two great recipes. One is easy and fast, the other a bit longer but very good. Both recipes call for chocolate cake, but brownies work well, too. A true trifle includes alcohol, but you can eliminate if you must. Just an FYI: You can assemble mini-trifles in glass mugs or mason jars for individual servings. Stick a candy cane into the mug.

This one is fast and easy to make, and you can use the Peppermint Bark you've made or purchased.

Ingredients
1 chocolate cake cut up into cubes
1 large box of chocolate pudding (add a couple of drops of Peppermint Schnapps to the pudding). Make the pudding.
Ghirardelli (or another--Trader Joe's--or your own) Peppermint Bark, chopped into chunks
Whipped Cream (I always whip my own with a little sugar)

O.K. I'm not much for proportions, but most trifles aren't. Use what you have, and I'm sure you won't go wrong.

This is the longer of the two recipes, but absolutely delicious. I've adapted Martha Stewart's recipe for Triple-Chocolate Peppermint Trifle. She has a chocolate cake recipe, but you can skip it and make a good chocolate cake from a mix, then follow the rest of this recipe.

You can make the trifle components the day before you assemble the trifle. Be sure and refrigerate everything in separate airtight containers.

FOR THE SYRUP
1/4 cup granulated sugar
1/3 cup chocolate flavored liqueur, such as Godiva

Make the syrup: Bring sugar and 1/4 cup water to a boil in a small saucepan, stirring until sugar has dissolved. Let cool completely. Stir in liqueur.

Make the mousse: Prepare an ice-water bath; set aside. Bring 1 cup cream just to a boil in a small saucepan. Place white chocolate in a food processor; with machine running, pour in hot cream in a slow, steady stream, and process until smooth. Transfer to a medium bowl set in ice-water bath. Let cool, stirring occasionally, until thick enough to hold ribbons on surface, about 15 minutes.

Beat remaining 1 1/2 cups cream to nearly stiff peaks. Fold into chocolate mixture, then fold in candies. Cover with plastic wrap, and refrigerate until thickened and almost firm, 4 to 6 hours.

Make the pudding: Put chocolate into a large bowl; set aside. Bring cream almost to a boil in a small saucepan. Whisk yolks in a bowl. Pour in hot cream in a slow, steady stream, whisking.

Pour mixture back into pan. Cook over medium heat, stirring, until thick enough to coat the back of a spoon, about 1 minute. Pour through a fine sieve over chocolate; whisk until smooth. Set bowl in ice-water bath. Let cool, stirring occasionally, until thick enough to hold ribbons on surface, about 15 minutes. Place plastic wrap directly on surface; refrigerate until set, about 3 hours.

To assemble: Spread one-third of the mousse into bottom of a glass trifle bowl that is 8 to 10 inches in diameter. Top with a cake layer, and brush with half the syrup.

This recipe is divine.

**
As with most recipes, you don't have to add alcohol, but a true trifle would have it.
Posted by Janet Rudolph at 10:14 AM