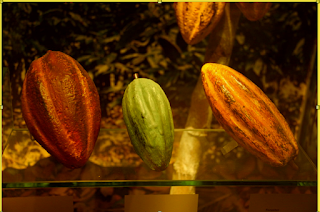 My worlds of mystery and chocolate collide yet again. Today I welcome Michael Niemann. Michael Niemann is the author of the Valentin Vermeulen thrillers. In his spare time, he teaches International and African Studies at Southern Oregon University, including a class on cocoa and chocolate.

People who know their way around chocolate are mostly familiar with the traditional classification of cocoa beans, criollo—the best of the best, forastero—cheap, bulk cocoa, and trinitario—a hybrid between the two. Recent genetic research shows that these distinctions aren’t correct. What does that mean for us chocolate lovers?

The original classifications date back to Spanish colonial rule in Latin America. It took a while before the Spaniards developed a taste for the cocoa drink favored by the Aztecs and other indigenous peoples. At first they abhorred the bitter taste. But they figured out that adding sugar and vanilla turned the vile drink into something more suitable to their tastes. Before long, the women of the Spanish elite couldn’t make it through a Sunday mass without their drink. Even the threat of excommunication wouldn’t end their habit. It was easier to have the bishop poisoned, with a chocolate drink, of course. Once drink was brought to Europe and demand for cocoa beans went through the roof.

The traditional Mexican growing areas in Soconusco and Tabasco couldn’t keep up with the demand and Spanish merchants went in search for more sources of cocoa beans. The found them along the northern shores of South America, especially Venezuela and Ecuador. But that cocoa was different from the cocoa grown in Mexico and deemed to be of inferior quality, hence the name forastero (foreigner) as opposed to criollo (native).

But Forastero beans were more plentiful and, after the Portuguese introduced the cocoa tree in Africa, quickly became the dominant bean. Today, about 90% of all cocoa grown is classified as forastero and only 2-3% as criollo. The remainder is the hybrid trinitario. 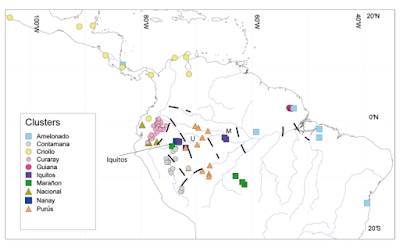 That’s where things stood until a team of researchers lead by Juan C. Motamayor, extracted DNA from 1,241 different trees. The processed the samples and found that rather than three types of trees, the clusters they found suggested ten types. Localization of the origin of individuals analyzed; colors indicate the inferred genetic cluster to which they belong.

What does that mean for us chocolate lovers? For one, the notion—criollo = good, forastero = bad—may have been merely a reaction of the Spaniard to the different qualities of the cocoa they got from South America. Since then beans from a variety of sources are made into excellent chocolate. Ecuadoran Arriba beans (also known as Nacional) are famous among connoisseurs and the Amelonado bean which was exported from Brazil to West Africa is the mainstay of a lot of great chocolate. Sure, a lot of poor chocolate is made from cheap beans, but that has more to do with the quality of the growing and processing of the bean than with the bean itself.

There is something else, that’s even more important. Having ten types rather than three offers plant breeders a far better array of option when it comes to developing new strains. Why do we need new strains of cocoa trees? Because the growing conditions for cocoa have changed dramatically.

Over the past century, the best cocoa always grew on freshly cleared forest land. Replanting those farms always led to lower yields which pushed cocoa growers deeper and deeper into the forests. Well, today, there are few forests left. Add to that global warming and the cocoa tree is under siege. A more complex classification scheme allows for new mating patterns which could lead to trees better adapted to the changing condition. And that is something all chocolate lovers can get behind.