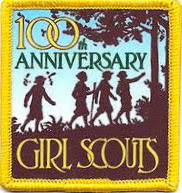 I was both a Brownie and a Girl Scout, and I'm a huge fan of Thin Mints (it's Girl Scout Cookie Time).

As a Brownie and Girl Scout, I trudged around selling cookies door to door by myself. There were no cookies being sold on street corners, nor were there any fathers (or mothers) coercing colleagues or employees to buy multiple boxes, although as a pediatrician, my father could have sold a lot of boxes for me. No, we were responsible for the sale--and the delivery- of those boxes. Since I wanted to sell a lot in order to be the 'highest' seller in my area (which I never was), I remember going very far afield one year. My mother actually had to help me deliver that year, and she was astounded by how far I had gone. We lived in the city, where neighborhoods changed block by block. No matter, it never occurred to me not to knock on any door. Good thing I didn't read adult mysteries or watch the news then. I must have been a Brownie, because I was only a girl scout after we moved to the suburbs. So I was under 10. Times were different. I wore my uniform and with that I was fearless. Kind of like superwoman only my costume was more modest. Still it protected me! In those times, it was all about selling the most cookies, not worrying about the deviant at the door. I got through my sales unscathed except for the development of my fondness for Chocolate Mint Cookies (now Thin Mints). Yum! Thin Mints make up over 24% of Girl Scout Cookies sales. No surprise to me.

Hillary Rodham Clinton was a Girl Scout, as was Laura Bush. Barbara Walters, Peggy Fleming, Venus Williams and Mariah Carey all wore Girl Scout uniforms, as did at least seven astronauts, 13 current and former members of Congress, and numerous executives and CEOs. 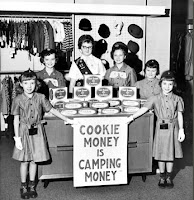 The first cookie sales by an individual Scout unit was by the Mistletoe Troop in Muskogee, Oklahoma in December 1912. In 1922, the Girl Scout magazine The American Girl suggested cookie sales as a fund-raiser and provided recipes. The first Girl Scout cookie recipe was a sugar cookie.

Despite flour, butter and sugar shortages caused by World War II, the Girl Scout Cookie program prevailed. In 1942 there were 48 cookies per box, available in either vanilla or chocolate. Customers were limited to two boxes during some war years.

In 1951, two other Girl Scout Cookies were introduced to the world—in addition to Shortbreads, the public could also purchase Cream-filled Sandwiches and in 1954 Chocolate Mints (now called Thin Mints) were introduced. Some bakeries even offered optional flavors to their respective councils.

I stopped by the bank the other day, and there were Girl Scouts selling cookies. I resisted this time, as I already have a supply of Thin Mints purchased from neighborhood children. However, if you don't run into any Girl Scouts (how can you avoid them?), you can make this home-made version of Thin Mints that Pattie Tierney posted on Dying for Chocolate a few years ago.

Of course, I just have to post another recipe here--Thin Mint Truffles from The Hungry Housewife. This recipe calls for a final coating of cookie crumbs, but you can also dip the truffles in dark chocolate with chocolate sprinkles or roll them in cocoa.

In food processor, process 1 sleeve Thin Mints Girl Scout Cookies until they resemble course sand.
Transfer mixture to large bowl and add cream cheese. Mix together by hand until fully incorporated. Scoop out by tablespoon (or use small scoop) and roll into nice ball in your hands to form truffles.
Pulse extra 3 cookies in the food processor until resembles course sand and place in small bowl. Roll truffles in processed cookie crumbs to coat.
Chill coated truffles for at least hour to set up.... or overnight for flavors to really develop with the cream cheese.
Posted by Janet Rudolph at 1:08 PM

What a wonderful tribute to scouting Janet. I really enjoyed this post.

Yes, I too was a Girl Scout. I often think about how the times were different then going from house to house selling cookies. I was so shy but once I had that uniform on, I thought I was invincible!!!

Things have changed, some good, some not. One thing has remained the same, Janet. Thin Mint cookies are sooooo yummy!!!