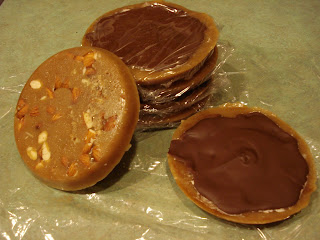 I love when my mystery and chocolate worlds collide, and I was lucky to meet author Lisa Preston at Left Coast Crime a few weeks ago. We immediately struck up a friendship, bonding over books and chocolate.

Lisa Preston turned to writing after careers as a fire department paramedic and a city police officer. Experience in her earlier professions enhance the medical and legal passages of her fiction and non-fiction. Her debut novel, ORCHIDS AND STONE, is scheduled for release by Thomas & Mercer in April 2016, and has been described both as a thriller and as domestic noir. Advance reviews include praise from the best-selling novelists Jo-Ann Mapson, Laura Moriarty, Kate Moretti and Carol Cassella. Her published work includes non-fiction books and articles on animals, particularly the care and training of dogs and horses. Away from her desk, she spends hours on backcountry trails as a runner and rider, sometimes combining her two outdoor pursuits via the obscure sport of Ride and Tie. She lives with her husband and Malinois on Washington State's vast Olympic Peninsula.

Toffee is the dessert I like to make for any gathering, and it’s my go-to treat for self-indulgence. Melting with coffee in the morning, relaxing with a nice glass of wine in the evening, it adds marvelous flavor. Years ago, a friend showed me how to make five-ingredient toffee with no fancy tools, not even a candy thermometer. I was set for life.

Because of her seat-of-the-pants style, I too have always shown friends how to make toffee, so that people could see and feel the right stage to pour the candy. I know what the boiling mix should look and feel like before it’s poured, but I don’t know if this is what’s properly called the soft ball stage, the hard ball stage, or any other stage. Having the candy cooked to the right point is the most important step, so it’s worth some discussion.

With room temperature butter, it takes about 15 minutes over medium heat to cook the toffee. (It’s fine to start with frozen butter.) While it’s cooking, chop the nuts (almonds, I say!), and sprinkle them into the pans or plates where you’ll pour the toffee. Saucers lined with foil work fine. After cooking and pouring, top the scalding, liquid toffee with the chocolate of your choice. Within five or ten minutes, the heat of the toffee melts the chocolate to a spreadable consistency. That’s right, you don’t even have to melt the chocolate separately.

This recipe yields a half-dozen four-inch discs of toffee. (If Janet doesn’t count how many pieces I mailed, she won’t realize I’m eating some of the toffee from her batch as I write this.)

So, the cooking. The candy needs only an occasional stir. The mixture of butter, sugar and coffee will boil, initially being very pale and foamy. Ten minutes later, it’s a scary mass that my friend called Golden Bubbles. I call it the Pulsating Brain. Watch this pulsating mass. It will gradually darken, settle and condense. Over the next five or so minutes, it feels thinner, no longer a thick mass following the spoon on your occasional stir. It’s ready: pour now! Just be careful guiding it into your saucers or pans or muffin top trays, because the candy is a million degrees and will land you in a burn ward if you get it on skin.

Pour much too early and you get fudge. A bit early and it’s a chewy mess. If you pour too late, oil separates out of the mix, floating on top of the toffee. (Ugh, but semi-salvageable. After the candy hardens, the floating butter will re-harden and you can wipe it away. Edible, but not presentable.) Wait even longer to pour, and it’s burnt, fit only for the garbage can. The closer you take the cooking toffee to the edge before pouring, the darker and more intensely-flavored the candy will be. The plus side of a pour at the earlier end of ready is that there is notably more toffee because it hasn’t reduced as much.

The toffee will be set up and hard by the time you spread the chocolate. The spread chocolate might need a few hours to set up, unless you married an Alaskan and moved him to a warmer state, and he’s still amazed that a house can get toasty inside and he lets the house reach 85 degrees on warm days, in which case, your chocolate will never set up.

Wait for all of the chocolate chunks or chips to look consistently shiny; that’s when they’re ready to spread. Mash out any chocolate chip shape. Of course, using better quality chocolate gives a better tasting end result. Don’t spread the chocolate over the entire surface of the toffee— a clean border of candy provides a non-chocolaty edge to hold during the most important phase: eating.

Recognize that you’re choosing the thickness of the toffee when you choose how many pans to use. The larger the pans you pour into, the thinner the resulting toffee will be.

Nuts and Other Variations

My girlfriend, Ann, poured toffee on mixed nuts, often whole or salted. I usually leave a few pieces plain for the nut-free people, and I once cooked the candy with just the butter and sugar, for a friend who didn’t like the taste of coffee.

This toffee makes you smarter, slimmer, funnier, and faster in distances from 5k to 50 miles. Even if the last bit isn’t true, easy peasy toffee is the most reliable and special self-indulgence I’ve found in the kitchen.
Posted by Janet Rudolph at 9:09 AM