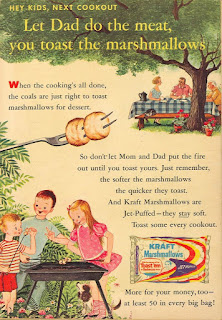 Tomorrow is Toasted Marshmallow Day, and for me, the best use of a toasted marshmallow is in S'mores. I posted so many S'mores recipes the other day for National S'mores Day, but in case you just want to make some basic S'mores...here's an easy recipe. Actually you don't even need a recipe, but in case you're one of the folks who like to follow exactly, here you go!

Of course you can make more than one!
Posted by Janet Rudolph at 9:47 AM